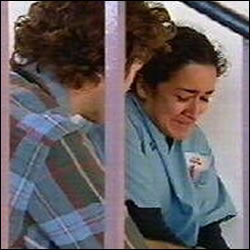 Lara and Tally walk into the ED discussing the problems between Tally and her dad. They come to the conclusion that Tally will have to make the first move as Harry wouldn’t.

The first patient is bought in by Luke and is passed over to Lara and Dillon. The woman on the trolley is Frankie Cunningham who came off of a motor bike. His friend rushes off to the airport before he is even in resus. After a few quips between Lara and Luke, Lara leaves to meet Tally in admin.

In the cubicles Simon is on the phone to Jane and gets caught by Harry, Anna is trying to avoid Merlin and Lara enters passing her patient over to Simon. She then asks Harry to come and have a look at a young girl in admin.

Reception is hectic as usual as Bex books in Ian Decotro with his arrogant, goby son Darren. Lara leads Harry out from the cubicles and into the staff room where Tally is waiting. Both Tally and Harry are annoyed at what Lara’s done and both leave upset. Back in reception Ian Decotro’s son is kicking up a fuss as his fathers pain is getting worse. He has a talk to Lara who knows him from being a patient a few days ago. She takes him straight through to cubicles as he doesn’t look so good.

Jack is with his father after the kidney transplant playing card games. [ID 307]Eddie[/ID] tells him about a locker in Holby train station which has the best part of £100,000 in it. Eddie wants Jack to take it if he dies because of what he has done to him over the years.

Comfort has bought in eight year old Tia Morrison after having an asthma attack. Her sister confides in Harry telling him that she thinks she hasn’t been taking her inhalers.

Merlin tries to talk to Anna but she brush’s him off and he leaves to help Simon with a patient. Anna goes back to Ian Decotro with some mouthwash but accidentally spills it on his son. As she tries to wipe it off she notices that he has a gun, obviously she is scared and unsure of what to do so she goes to find Charlie. He then phones the police and informs the staff of the situation. They evacuate the department and try to give the impression to the Decotro’s that everything is normal. At that moment the son comes out complaining that his dad isn’t being seen, so Lara goes in to help. She finds out that Ian had only come out of prison that day as Anna brings them tea.

Charlie goes to find Harry and tell him of the situation in the cubicles. Harry tries to get Charlie to let him take over from Lara but is persuaded that everything is under control and he should stay in peads resusc. Meanwhile Bex is taking details of patients who are being evacuated so they can return a little later.

Tony’s still up in the ward when Jack comes to visit him. He tells Tony what’s wrong with their dad and he seems relatively carefree. Tony talks Jack round and insists that everything is going to be fine.

Back in paediatric resusc Tia’s sister is worried as she has seen the evacuation of people from the cubicles and reception and asks Roxy what’s going on. She sticks to Charlie’s plan of telling everyone that there is a violent patient in the department. Tia’s sister then says that she hasn’t phones their mum yet as she hates hospitals and thinks there evil – plus she’s worried it will all get blamed on her.

He police have now arrived and Charlie tells Lara what the father had been put away for – 8 years for shooting a security guards legs to pieces and leaving him paralysed. Charlie gives her the choice to pass him over to him but Lara says she she’ll stay with them just in case it makes them suspicious.

Dillon tells both Harry and Simon that the police have arrived and will be placing armed guards in reception. Harry continues treating Tia but she deteriorates fast and Harry has to call up to the wards for help.

Meanwhile, Jack is with his dad when he crashes and is rushed out of the room to be resuscitated. Jack is frantically rushing around demanding to know what’s happening and if he’ll be alright.

Outside the patients have been herded behind a boundary as Merlin finds Tia Morison’s mum arrives and he tries to get the police an Charlie to let her in. Merlin comes back a few minutes later saying he can’t let her in. Frankie’s friends then returns and Merlin decides to lie to the police in order to get both of the inside. Harry is outraged by this but still lets them in.

Lara checks up on Ian again to find him doubling up in pain. She goes out of the cubicle to find the department deserted and Charlie tells her he wants her out as soon as. They also need to separate Ian and his son before action cane be taken. Shouting can be herd form there cubicle and Lara rushes over to see what the problem is. While Lara was away Ian’s son had shown him a gun. He goes mad and starts shouting at him to leave but doesn’t mention why.

Anna is sat in the stair well where Merlin finds her crying. He sits with her and tries to figure out what’s wrong but she just mumbles on about different things which make no sense to him. Eventually it all makes sense to Merlin and he realises that he is Anna’s half brother. He is obviously confused with this news and leaves Anna alone on the stairs again so he can clear his head.

In paediatric resus Tia’s mum admits that she hasn’t been giving her daughter her inhalers as she thought that the steroids would stunt her growth. Harry tells her otherwise and she gets upset and starts to cry.

After Tally stormed off from the staff room she went into her dads office and eventually fell asleep. When she wakes up she goes out into the reception area where two armed policemen aim guns at her. Harry walks in and sops them before anything happens and leads her outside to safety.

Lara is still with Ian and his son as Ian tells them of what happened to get his sentence. While this is going on the police decide that they want to move in on them and get rid of the gunman. The scatter the cubicle area with gunmen ready for the attack. Darren is then wound up by his father and pulls the gun out aiming it at Lara as he she’s the department is deserted. Lara tries to persuades him to empty the bullets out but instead of that he turns the gun on himself and shoots himself in the head. Lara is distressed as Ian crash’s and she starts compressions. Charlie stops her as she can see she’s distressed.

*Frankie Cunningham, came off her bicycle was bought in by ambulance.

*Ian Decotro, bought in by taxi with his son with stomach pains, possible perforated ulcer. Crashed and couldn’t be resuscitated.

*Tia Morrison, age 8 bought in by ambulance with her sister. Asthmatic with server attack, ventilated and taken to ITU.

[Tony looks out on the balcony of the hospital and can see Lara and Tally. Lara and Tally are walking and talking into the department.]

Tally: Sorry, I can’t do it

Tally: I just don’t think I can face him. He hates me Lara,

Lara: Your dad does not hate you Tally. He hates what’s happened. The fact is he’s not dealing with it, look someone’s got to make the first move and it’s obviously not going to be him.

Tally: You just want me out of the way,

Lara: Don’t be silly I love having you there, using the last of the loo roll, leaving the lights on. Brightens the place up! *to Luke* So what have we got here?

Luke: Frank Cunningham, calmed down been rung in. Ages you, smoking.

Lara: You should try it, maybe you’ll grow up!

[A gunshot is herd in paediatric resusc and Tally runs out to find Lara. Darren has a bullet to the head and is on the floor dead. Lara starts doing compressions on his father as he has crashed. Charlie enters the cubicle.]

Charlie: Come one Lara [takes he shoulders and leads her away from Ian. Checks Ian’s pulse and turns to Lara]

[Charlie then leads Lara out of the cubicle.]

*Anna and Merlin are step siblings.

In this article:Cas Series 17, Catherine Tregenna 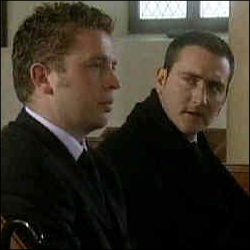 S17 E35 (10 May 03) : An Accident Waiting to Happen by Paul Cornell Episode Summary Jack is upset that Tony is not more grief-stricken... 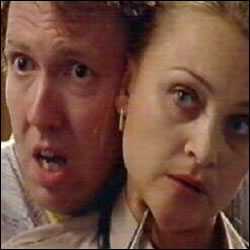