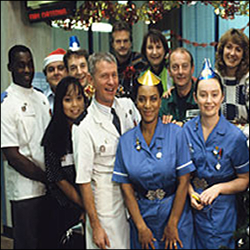 It is Dave Masters’ first day as the locum SHO. He has to deal with many of the casualties, including a man, John, who has dislocated his shoulder when demonstrating how to use a new exercise machine for his wife.

A man dressed as an elf is seen being chased. He escapes and witnesses an explosion in a nearby house. He phones 999 and when an ambulance arrives, he is taken into hospital. He tells Charlie that he is not hurt – the only problem he has is that his fake elf ears are stuck. They have to be removed and one of his ears has got badly infected. Charlie recognises the man from when he was in a couple of days ago. The man had left his wallet and Charlie and Jane realise that the wallet has lots of stolen credit cards in it. The man leaves in a hurry.

Firemen are called to the house where the explosion took place. One Fireman, Des, notices a woman upstairs in the house and goes in to rescue her. He manages to get her out but she later dies. Des discharges himself from hospital and goes home. He has split from his wife, Kate. We later discover this is because she has not left the house for over a year, and Des couldn’t cope. Des collapses and is brought back into A&E. His wife manages to leave the house to visit him. They decide to try again with their relationship and Des says he will take early retirement to help Kate get better.

A young girl, Rose, collapses. She is taken into Casualty where she reveals to Mike that she has suddenly gone blind. Her sight soon returns but then she loses the feeling in her limbs. Mike diagnoses a tumour in her heart. Her overbearing parents don’t want her to be told.

.Lucy and Josh narrowly miss hitting a man on a motorbike whilst in the ambulance. He is unharmed and turns out to be the new hospital chaplain, who helps to calm Rose.

Charlie mentions Duffy’s son to Adele. She says that Charlie is bound to miss her. Charlie snaps at Frankie during the shift, but later Frankie comes to his rescue, performing the Heimlich manoeuvre when Charlie is choking on some bread. Josh spends the shift carrying a bit of mistletoe and kissing most of the female staff.

Des Jones – smoke inhalation and collapses after discharging himself.

Mary and Ash are walking into the hospital grounds. Dave joins them.

Mary: Not for another 9 minutes 35 seconds!