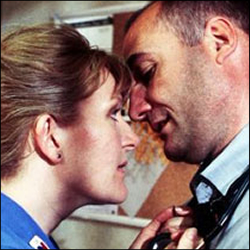 The new resus is opened just in time for the team to treat a young boy, Niall, who is choking. His overbearing mother thinks there is something seriously wrong, but it turns out that Niall has bitten the heads off his fathers toy soldiers because he was made to play with them, as it was rememberance day.

Another boy, Troy, falls off his new skateboard while he is out with his dad. He is taken to A&E and his arm put in a sling. Troy’s father tries to ring his ex wife, but can’t get through. Troy is late for his own birthday party. When Troy is taken home, his parents argue. His mother thinks that his father is irresponsible and does not want him to see Troy anymore. Later on, Troy is sick and an ambulance is called.

Clyde is making a bomb at home and burns his hands in the process. He and girlfriend, Ronnie, go to A&E to get treated, saying the accident happened while they were messing with fireworks. Tina treats them, but they leave in a hurry when she mentions that they will have to fill in a form. When they get back home, it is revealed that they are planning to set a bomb off in a laboratory that tests on animals. Clyde dresses as a deliveryman and plants the bomb. Ronnie has previously got a job working in the laboratory cafe, so sets the fire alarm off. Everyone leaves the building except for a scientist, that confronts Clyde. They both are injured when the bomb goes off.

Mitch and Mary Todd visit Mary’s parents. Mary’s dad, Benny, has Obsessive Compulsive Disorder and insists on everything being clean. Benny and Mary argue, and Benny accidentally puts his arm through a glass panel on the front door. He is taken to hospital but is terrified of all the germs that could be around. His arm is stitched but soon he pulls the stitches out, thinking they are dirty.

Duffy has been nervous all shift as she has her Sisters interview. Charlie tells Max that he can’t show Duffy any preferential treatment, and Max is annoyed that Charlie doesn’t think he is up to the job. Before the interview, Max wishes Duffy good luck. During the interview, Max is hard on Duffy. Charlie picks up on this and later asks him why he did it, Max replies that he was just trying to find the best candidate for the job. Duffy asks to speak to Max when the interview is over and they go up to his office. They have an argument, and Duffy asks Max if he has a problem with her, and if so, why did he have to let her know during a job interview. Max admits that he was trying to hide his true feelings for Duffy from Charlie – that he didn’t want to appear biased. Despite this, he says that he is totally and utterly biased. The two kiss and this leads to them lying on Max’s desk together, still kissing. Charlie comes up to see Max, and sees the two of them through the blinds.

*Niall Fleming- Choked after swallowing the heads from toy soldiers.

*Troy Milburn- fell of his skateboard.

*Clyde Carney: Burnt his hands and face when making a bomb.

*Benny Jenkins: Cut his arm when he fell through a window.

Duffy: If you have a problem with me then I want to know. But I hope that you might have the guts to tell me face to face rather than in the middle of some job interview! Well? Don’t you have anything to say for yourself?

Max: I didn’t want Charlie to think I was biased!

Duffy: Well there was no danger of Charlie thinking that you were biased!

Max: Oh yes there was!

Max: BECAUSE I AM. Totally, and utterly biased. Congratulations by the way, you got the job. I’m not supposed to tell you but I don’t care. Want to celebrate?

Duffy and Max are kissing; Charlie comes out of the lift and sees them through the blinds.

* Robin Weaver, who played Jenny, had also been in S5 E4, as a young homeless girl.