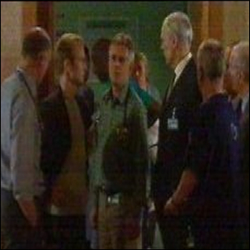 Alan West eats a large fry-up for breakfast. His partner, William, criticises his unhealthy diet and then produces a packet of cigarettes that he has found in Alan’s dressing gown pocket. Alan denies owning them and walks out to go to the supermarket, leaving William to clear up. In the car Alan lights up a cigarette coughs and drops it between his legs. In his haste to retrieve it he doesn’t notice that the car in front has stopped, and he drives into it. Mel brings him into A&E where the staff discover that he has a foot ulcer which he tells them he had gouged last week in the hospital on Kimberly ward. Colette spots the cigarette burn on his thigh – he claims not to know how it got there as he doesn’t smoke. Max is concerned about his cough and temperature. William comes in to visit him and Max explains the complications. There are areas of consolidation on the chest x-rays but the tests have proved inconclusive. Alan explains that William’s father died of lung cancer three years ago and that William is concerned that Alan may now have it. Max tells them that it is unlikely to be cancer and more likely to be pneumonia. Charlie receives a phone call from the lab- Alan’s urine tests confirm that he is suffering from Legionnaire’s disease. Later William discovers that Alan is missing from his cubicle, he goes outside and is angry to discover him smoking. Alan tells him that the doctors don’t know anything; his uncle smoked 60 a day and was fine. Colette comes out to take him back into the department. Max tells Alan that he has Legionnaire’s which is life threatening in young, healthy people but very serious in diabetics like himself. Alan explains his problems giving up smoking to William. His partner complains that Alan would rather die than give up smoking and asks what that says about their relationship. It transpires that the two met when Alan was William’s lecturer. William says that he is not willing to see someone going through cancer again and leaves the hospital.

Steve Harris wakes up his son, Tyrone, and insists that he gets out of bed. Tyrone is very reluctant and complains that he has stomach ache. Whilst they are eating breakfast, Tyrone’s mother, Sheila, comes into the room. Steve tells her that they are going to the park to practice, as it is Tyrone’s first match for the second XV that afternoon. In the park Steve makes Tyrone practice kicking. He refuses initially but eventually produces a good kick. Steve runs backwards to catch the ball and runs into the upright of the posts and is knocked unconscious. Tyrone dials 999 on his father’s mobile. When Fin and Penny arrive Steve denies that anything has happened and refuses treatment, as he has to get Tyrone to the match. Eventually he collapses coughing. When they arrive in A&E Steve insists that he is fine but Andrew is concerned about his temperature and low blood pressure. Sheila arrives and Steve tells her she must take Tyrone to the match. When she reuses he gets up to take him himself. Tyrone refuses to go and tells his father that he doesn’t even like rugby. Steve collapses again. Outside the cubicle, Andrew hears Max talk about Alan West and realises that Steve’s symptoms are the same. Sheila complains that she never gets to see Tyrone and feels like she is playing gooseberry in her own home. As she walks out of the cubicle Steve starts coughing up blood. Max explains that he is suffering from an unusual type of pneumonia and discovers that Steve had recently worked in the hospital, fixing the air conditioning on Kimberly ward. Later Steve explains to Sheila that he can’t believe that she wants to be with him; he feels so useless and is scared that she’ll discover this and not want him any more. Eventually the staff find him a bed on the respiratory ward.

Mel and Fin are called out to Lucy Curry. Her friend found her slumped in an armchair unconscious. They assume that she is suffering from carbon monoxide poisoning. In resusc she tells Andrew and Barney that she feels terrible, has a headache, an unproductive cough and fells nauseous. Andrew is concerned about her inconsistent symptoms and thinks he recognises her from his time at Broadway General. Barney produces her notes and they discover that she attended the A&E department every month for two years. When the department got wise to it, they referred her to a psychiatrist but she didn’t attend the appointment. Initially they suspect that she has poisoned herself but the chest x-rays suggest pneumonia which is also confirmed by the blood tests. Later she develops a rectal bleed and breathing problems; it is clear that she too has Legionnaire’s. Andrew tells Max that she is close to septic shock. Lucy confides in Barney that she had thought she would feel better if she were really ill but she just feels frightened and stupid. Her condition deteriorates and Andrew concludes that she must have had the disease undetected for some time. She goes into septic shock and is on the verge of renal failure as she is taken up to ITU.

At the start of the shift Max tells Dan that the cubicles are full and they are having to keep patients on trolleys. Charlie confirms that there is a lady who has been waiting five and a half hours on a trolley. Dan asks him if he has had time to read the Chief Executive’s new guidelines and promises to find beds for the patients himself if Charlie will look through the document. Later Charlie is on the phone, arguing with Baz in Canada. He tells Max that it can’t be right, a mother taking a child to the other side of the world against the father’s wishes. However he can’t find a solicitor who is willing to take on the custody case. Max suggests that this may be because he stands no chance of winning. If he continues to fight with Baz he may be setting himself up for future disappointment. However, Charlie receives another phone call from a solicitor who is willing to take on the case.

Dan goes up to Darwin ward and manages to convince Julie to speed up clearing beds. He also asks her to the annual Mary Cavendish party that night but she tells him that she has to wash her hair! Back in A&E Charlie and Max make Dan personally apologise to Mrs Simmons who has been waiting over six hours – in accordance with the new guidelines. She berates Dan about the state of the NHS and tells him that at 75 she shouldn’t have to be waiting that long on a trolley. Seizing the opportunity, Dan pretends to be amazed that she is 75. Later, as she is being taken up to a ward, Mrs Simmons gives a piece of paper to Tom with her phone number on it to give to Dan as she is going to invite him to bingo when she gets out of hospital. When it transpires that there are three cases of Legionnaire’s in the department, Charlie, Dan and Max are concerned that it may be an epidemic. Charlie suspects that the source may be the hospital as Lucy Curry’s sister and Alan West were both on Kimberly ward recently. They also discover that Steve Harris had been working on that ward. Charlie tells Dan that they have to tell public health but when Dan discovers that the link is possibly the hospital he changes his mind and suggests that they are being too premature – if public health suspect that the source is in the Mary Cavendish block they would shut it down which would be a disaster for the already overstretched A& department. He insists that they should notify them when all the cases are confirmed. Dan goes up to Kimberly ward and discovers that there are at least six other patients who were on the ward at the same time but are perfectly fine. He is still keen to not mention the hospital.

However, Charlie tells his that it is too late; the three cases have been confirmed as Legionnaire’s and he has informed Brian Oliver from Public Health. Dan maintains that there is still no evidence and that Charlie’s actions will have serious operational consequences for the hospital. Max supports Charlie. Brian Oliver arrives in the department and Dan tries to point out that the link with the hospital is merely circumstantial and not yet confirmed. The inspector tells him that that is what he is there for and he wants to go up to Kimberly ward straight away. When he has gone, Dan asks Amy to dig out all the existing records for the three patients. Together they discover that Alan West is a lecturer at Holby College and that Lucy Curry is also a student there. When they ask him Steve Harris confirms that runs a sports club at the college on two evening a week. At this point Fin and Penny bring in another student from the college who has collapsed in his hall of residence suffering from the same symptoms. Brian Oliver returns and informs them that he has shut down the entire Mary Cavendish block. Dan tells him that they feel he feels the college is a more credible source, especially as there are no other patients with the symptoms on Kimberly ward. Brian agrees that this adds up but cannot reopen the ward block until the results of water tests have come back the next morning. In Charlie’s office, he and Dan argue about the outcome of the situation. Max intervenes and points out that they were both right and both wrong but they have been lucky as the inspector could have shut down the whole hospital. As they are talking the fire alarm goes off. They discover Alan West has been smoking in his cubicle. Max produces the discarded cigarette but Alan denies it!

In this article:Cas Series 15, Chris Jury 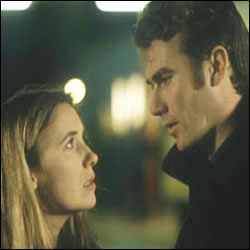 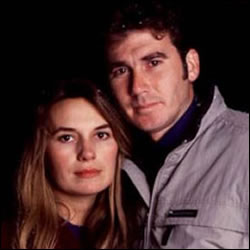