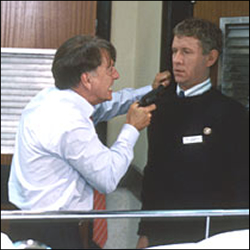 Steven Hills comes to A&E, he is HIV and is unwell. Ash thinks he is a hopper, but Beth disagrees and tries to advise him, when she finds him hiding in the women’s toilets. A woman, with a rash comes in with her husband, Mr Wheeler – but it’s him who gets ill, when a wasp stings him in the neck, and has an anaphylactic shock. Megan tears up a letter she was about to post to Tony and tells Duffy he really hurt her.

A schizophrenic man, James Lawrence, is brought in after being hit by a motorbike. He has just murdered his wife, Emma’s colleague, Robert, after believing they’ve had an affair. As Beth and Megan treat him in a cubicle, he pulls out a gun and takes Megan hostage and into CRASH. Megan tries to stay calm as he talks of betrayal, reminding her of Tony Walker. James insists a porter take out a dead body – a 65 year pawnbroker who was brought in after being found dead in the street – Charlie, wanting to help, dresses in Jimmy’s uniform and goes in, but it backfires when Megan calls Charlie’s name. Later on Megan is just about to get the gun from him, when negotiator, Peter Collier, calls out to him again, then Emma runs out and tries to talk to him, making him more angry. He aims to shoot at her, Charlie rushes to move her away, but is shot in the chest. The team battle to save him.

Duffy : Do you want one? (sees Megan holding letter addressed to Tony) Are you alright Megan? (Megan rips up letter)

Megan : Is Charlie gonna live, is he?

Duffy : I don’t know Megan, we’ll just have to wait and see

Megan : That is what we tell people everyday, isn’t it?

* James’ three demands were; 1. All the police to clear hospital within half an hour, 2. Wants to leave with Megan and 3. If he sees police, he’ll shoot Megan.