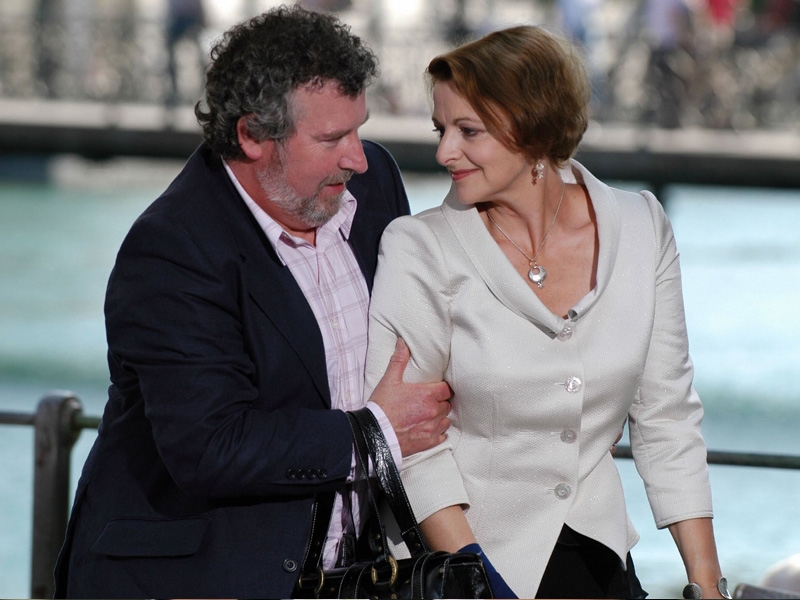 Connie has gone to Liberte, in Switzerland, with Gina while Elliot remains in Holby unaware of what his wife is intending to do. However, as the time draws nearer, Gina admits to Connie that she wishes Elliot was with her. Connie tells her she has already called him and he is on his way.

When Elliot arrives, he is desperate to change her mind but she remains adamant with her decision and asks him to respect it. The couple spend the last few hours reminiscing about old times before emotionally in Elliot’s arms, Gina drinks a lethal cocktail of drugs which ends her life.

As Elliot and Connie talk after Gina’s death, we learn that Connie is pregnant.

Back in Holby, when Bradley comes back to collect the last of his belongings, Reg confronts him about the drugs scam and when he dumps Donna, she finally realises what he is really like and punches him. Reg feels it now time to say how he feels about her – she says she already knows but wants them to be just friends. Reg is deflated.

Elsewhere, a patient, Billy, comes in with a tear to his aorta. His pregnant wife doesn’t know he was chucked out of the army following an addicition to cocaine – which he used to cope with the stress during his time in Iraq. Joseph, who treats him, sees how his own life could be affected by his actions.

* Billy Greenwood – tear in aorta, cocaine in his system.

* Gina plays a tape at the end which is of Elliot singing the Van Morrison song ‘Moondance’.

* Elliot at first thinks Gina is in the Lake District. He’s already missing her at this point, ‘We haven’t spoken since yesterday – it’s a long time not to have spoken’.

* ‘Are you tired of life Gina?’ the doctor asks her. ‘No, I’m just tired of this disease,’ she replies.

* ‘Would you do this if you were me?’ Gina asks Connie. ‘I doubt I’d have the strength,’ Connie replies. ‘I’m not doing this because I’m strong – I’m doing it because I’m selfish.’ Gina says.

* Gina begs Elliot to accept her decision, ‘This is the last thing I will ask you – be with me, help me, do this. This is my time to die’.

* Elliot reveals to us that Connie’s pregnant. ‘Where there’s death, there’s life,’ he says and toasts ‘Here’s to Gina and your baby.’