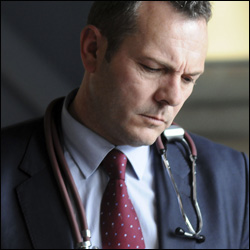 At Jordan’s flat, Zoe is excited about Rome. But Jordan isn’t feeling well and has a headache and is also distracted when a letter from his neurologist arrives.Later, while examining a patient, Jordan begins to have a seizure and Charlie calls a shocked Zoe to help. She tries to deal with Jordan in a professional manner, but finds it difficult to stop her emotions rising as the staff speculate as to what has caused his sudden collapse.

In his bedroom, meanwhile, Jay tenderly watches Ruth sleeping. As he takes a shower, however, Ruth wakes up, panics and rushes out – leaving Jay his payment for the previous evening’s “date”. As a half-naked Jay chases after Ruth, he is locked out of his house and has to be rescued by Jeff and Dixie.

Elsewhere, Adam is in the Emergency Department when Jessica arrives with Harry – the plan to reel in Sean has worked. Sean calls and has a ticket for Jessica to fly out to Saudi with Harry. Adam is horrified that Jessica would even consider going to Saudi, given that she has no legal rights there. But Jessica is desperate to see her children.

In this article:Cas Series 23, Sasha Hails