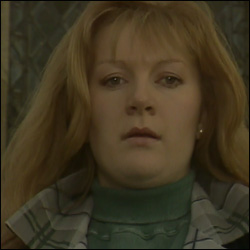 Valerie tells Ewart that Major Franklin is to be closing the Observation Ward – it is to be used for day surgery. Ewart says he will fight. Valerie tries to explain that the Obs Ward is only used as a resting place – she says it would be much more efficient to either discharge the patients or get them immediately admitted to a ward. She also says that day surgery would free up some overnight beds. Ewart argues that that would be the case in an ideal world, but the situation now is far from ideal and she is not helping matters.

Duffy goes to a cubicle to suture a patients wound, but when she sees the patient she is stunned at his resemblence to Peter. She flees the cubicle and tries to collect herself outside. Cyril sees her, and asks if she is okay. She asks him to take over the stitching. Later in reception, Charlie asks if she has done the stitches, and she tells him that Cyril is dealing with it. He looks puzzled, and asks her instead to talk to an old man who cannot remember where he is or who he lives. Duffy later reports back, saying she can’t get anything from the old man. However, when Charlie goes to see him later, within minutes he discovers a hospital band on his wrist, and gets Cyril to find out more. Later on, a nun turns up to collect him.

An old lady, Mrs Johnson, collapses at the airport, after returning from Nigeria. She is collected by Keith and Shirley who believe it is a tropical disease. At first, David agrees, but Charlie thinks it is an overdose. David doesn’t think she is the type but when examining her vomit, Kiran finds a condom full of drugs. They decide one must have burst and wash out her stomach. 30 packages in all are found, and Charlie insists on calling the police. David disagrees, and says it is his patient and he needs to respect confidentiality. Charlie notifies them anyway, but later finds out David came to the same conclusion.

A Catholic woman, Laura Flynn, confesses to her priest, Father Paul, that she is pregnant by her brother-in-law, Declan. She later cuts her wrists and is found unconscious in church by the priest. At A&E Duffy speaks with Father Paul, trying to gather more information to help the team treat Laura. However, the priest tells her nothing more than the woman’s name and address, saying he was told other things in confession but is not at liberty to reveal them. Duffy tells him she thinks this is ridiculous and he could be jeopardising Laura’s recovery, but he still keeps quiet. Duffy complains to Megan about this, but Megan says the priest is doing the right thing and if he had told Laura’s secret she would report him to the pope because confession is sacred and she would like it to stay that way. Later on, the team find out she is pregnant when she begins to bleed. Laura loses the baby. Her husband is told, but is enraged when he finds out she was only a few weeks gone, because he has been away and there is no way the baby can be his

A woman, Beverly Jason, comes in with her overprotective husband, Trevor who complains about the waiting times saying they are due to be at dinner soon. Beverly has a grazed ankle, but later reveals to David that her main worry is she thinks she may have breast cancer. David examines her then calls Ewart for a second opinion. Trevor comes into the cubicle and finds Ewart examining her and begins to shout at him. They throw him out of the cubicle and Beverly reveals he is very jealous and never lets her see the doctor because he thinks they all take advantage of their patients.

Megan has tension pains in her stomach, she tells her fears to Ewart, that she’s worried her cancer is returning. Elsewhere in the hospital, Kuba invites Sadie out on a second date, with her and her children, but she backs off thinking he’s getting too personal.

Charlie finds Duffy alone in the staffroom and begins to give her a telling off over her behaviour on the shift. He begins to go through all the silly mistakes she has made when she breaks down in tears, and tells Charlie her boyfriend Peter has died. Feeling terrible, Charlie gives her a big hug and she clings to him, sobbing. Near the end of the episode, he takes Duffy to see Peter’s grave for the first time. She places a single red rose and tells Charlie she’s ready to get on with her life. He takes her hand and squeezes it.

* Mrs Johnson – elderly lady, swallowed condoms full of drugs on a trip back from Nigeria.

* Beverly Jason – comes in with ankle graze, but has breast cancer fears after finding a lump.

* William Olten – old man, his identity is found after a name tag around his wrist.

* Man – with a slash on his face, complains about waiting time and is racist towards Kiran.

Aeroplane landing at night, passports are checked/ in A&E;

Alison : Mr Dickens if you’d like to come this way

Man : I might’ve guessed it, if there’s Paki’s running around in this place there’s bound to be delays

Kiran : That sort of comment we can do without

Alison : And for your information, she not from Pakistan, she’s from India.

Charlie : Right are you ready to get on with it again?

Duffy : What life? Yeah I’m ready to give it another whirl (he takes hold of her hand)

* Megan comes from Carnie in Ireland. 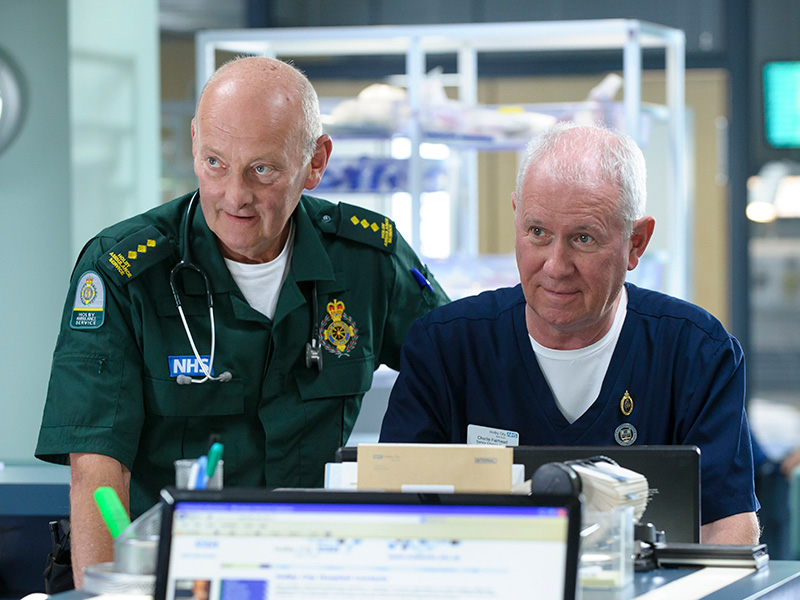 Connie tries to get to the bottom of her health problems, and while she waits for the results of a scan, she pours her... 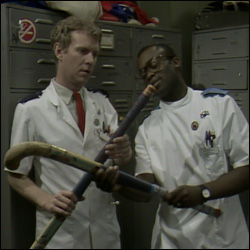 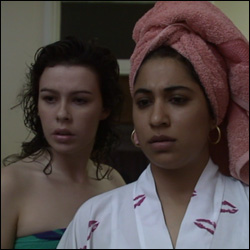 S3 E7 (19 Aug 89) : A Wing and a Prayer by Ginnie Hole Episode Summary Alison and Kiran come back to their nursing... 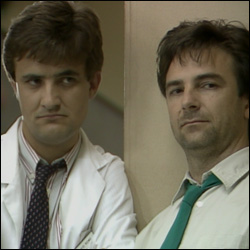