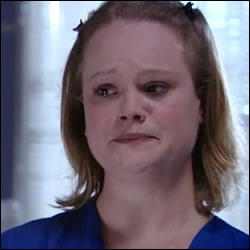 Jo Linden is out shopping one afternoon when she becomes suspicious of a young man who seems to be following her through the shopping mall. She tries to hide in a disabled toilet, but is interrupted by Maxine, a disabled woman, and her daughter, Sally, who are arguing over a letter Maxine has hidden from Sally’s father. Jo, meanwhile, thinks she’s shaken off the suspicious man, but he terrifies her when he appears at her car window. In a complete panic, she reverses her car but hits Maxine in the process.

Back in the ED, Alice tentatively asks Kelsey if she is okay. Kelsey tells her that James, her soldier friend, has died. She seems to be unaffected by the news but, later, it hits her and she breaks down and weeps for what could have been. Big Mac looks on, devastated at the pain he has caused her.

Jeff, meanwhile, is concerned about Zana and confides in Curtis – he’s worried she might be taking drugs. Curtis says he can pull a favour to get a test done on her blood. Jeff is unsure, but when he discovers some morphine is missing, he agrees to Curtis’s plan.

Elsewhere, Maggie is frustrated and irritated when she is asked to look at one of Simon’s MIU patients. She recommends some tests be done and storms out. Later, following the patient’s death, her judgement is called into question and all references to the tests have disappeared. Simon denies all knowledge and says Maggie told him to discharge the patient, and produces his notes as proof. Maggie is astounded at his lie, and Marilyn warns her it could end up in the Coroner’s Court. Charlie, meanwhile, is there for Maggie as she hits rock bottom.

In this article:Cas Series 22, Paul Logue