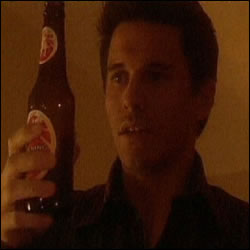 Owen and Mubbs discuss the new midwife, Rosie Sattar. Owen says something about her not being his type but Mubbs feels he’s in with a chance.

Jess and Lisa disagree again on Lisa’s position. Jess asks Ric for some money. Ric says no and tells her to stay at home rather then going out.

Sandy and Chrissie are waiting in a room on maternity. Sandy says Chrissie fainted although Chrissie says she just went lightheaded. Chrissie goes to leave as she needs to get back but Sandy says Tom Campbell Gore insisted she came down.

Danny runs in on Sandy as she’s in the shop. She misreads what he says and thinks he is telling her to go with him to Australia. He tells her he has to see his tutor but wil meet Sandy later.

Tricia goes to see Chrissie who is being kept in due to high blood pressure. Chrissie argues with Rosie over having to where a hospital gown and not having her uniform. Tricia offers to talk to Owen but Chrisise says no.

Danny goes to see Kath after seeing his tutor. She argues about him going to Australia to live, although he says his tutor can get him sorted with his nursing over in Australia. She explains that she has just got Terry’s will money through and is going to give some if not most of it to Lisa. Danny asks if he could possibly borrow some to go to Australia. Kath snaps and asks why he has to go, as she wants him to stay, his reply of there’s nothing for him in Holby upsets Kath and makes her feel isolated. Danny goes off passing by Sandy to remind her about meeting him. Jess comes up and hands Sandy some files and comments on how nice Danny is looking. Sandy then explains that Danny has invited her to Australia and what she should do.

Ric has to diagnose his patient with cancer which is something he dreads. Kath tries to calm the patient from his restless and angry father. In an attempt to get the patient space Kath takes him for his CT scan.

Danny goes to see Lisa to try and make it up with her. He admits he was wrong in causing arguments. He brings Kath up slightly to which Lisa gets wound up. Danny tries to calm Lisa and admits he did a lot of meditation whilst he was away. Causing him and Lisa to laugh for the first time in a while.

Lisa goes up to Keller after taking her patient to see a patient there. Lisa speaks to Kath who gives her some of the money from Terry’s will. Lisa says it’s just guilt money and won’t pay for what she’s done. In her temper Lisa rips up the cheque and puts it into Danny’s collection.

Diane and Danny meet on Keller as Danny is still around the hospital. Danny apologises for not making it to Steve’s funeral, he couldn’t change the flight date. They discuss Steve and about how much of a loss it is.

Jess and Lisa disagree causing Jess to fly off the handle with Lisa. Lisa tells Jess her beliefs. Those being that Jess is actually living off Ric. Jess then comments on Lisa and how she needs to forget the past. Telling her she’s being selfish in the way she’s acting now she’s lost her dad. That Lisa isn’t the only one dealing with the grief of death.

Diane and Ric go into theatre. Diane operates. Being guided by Ric who tells her what to do. She goes to finish up before feeling very sick. Ric takes over and she walks away from the patient.

Chrissie helps a woman in maternity who had earlier been in the bed opposite. Chrissie see’s that the woman is having difficulties with her baby. Chrissie becomes very maternal and rocks the baby to sleep. When the patient later runs away, Roxie offers to stay all night to look at the baby whilst Chrissie takes the womans side against Owen.

Jess and Lisa make up. Jess admitting she wasn’t fair. Jess manages to get Lisa to agree to go to Danny’s leaving party. Jess also admits she misses Steve which Lisa seems to understand.

Sandy realises Danny doesn’t love her or want her to go to Australia unless it’s to visit. She and Jess stand in the toilets as she cries over her own stupidity. They leave as Diane comes in. Diane goes into one of the cubicles where her being sick is heard. Kath gives Danny a cheque for money out of the will money. Kath tells him she doesn’t agree but wants him to be happy. He makes a speech before toasting to the present and departed.