The full story about the hospital trust investing in a company making arms is out in the papers and Laura is very nervous that someone will find out it was her leaking the story to the press. Henry Reeve-Jones says he is going to go to the bottom of it, trying to find out who it was, threatening to sue the paper and forcing them to reveal who it was. Laura talks to Ash and says she would love to get married to him.

Hope and Monica Cornish are two 75-year-old twins living on their own. One day a man comes to their farm and says she wants to talk with Monica. Hope, however, is not that pleased about this and in the end she brings out a gun. Monica goes to stop her from using the gun and it ends up with Hope getting shot in her foot and they go to hospital, with the man following them from behind. It turns out that the man is Monica’s son and that Hope after his birth had told Monica that he had died. Against Hope’s advice Monica goes to talk to him, asking him about his family and his children and eventually leaving Hope on her own at the hospital and going with her son.

A woman called Isabel comes into A&E with a fractures wrists and a piece from a plate in her hand after having fallen on one. She says it happened while cleaning the floor, but the nurses do not seem to believe her. They find out that her husband has Huntington’s disease and when talking about this to Isabel’s daughter they ask if it was her dad who hit Isabel, when in fact it was the daughter who accidentally made her fall down from a ladder when they were having a fight.

Security Services are transferring Agir Sakir, a Curdish azylum seeker, who has been on hunger strike at the detention centre. All in sudden he jumps out of the moving car, getting injured while doing so. The x-rays show that he only has broken his zygoma, but they also show some healed broken ribs he has, proving that his stories about the Turkish Police having been torturing him are true. Jude is desperately trying to help him from ending up in prison, but Charlie keeps saying that she should concentrate on her job. Jude gives him some numbers for lawyers who might be able to help him and then he, all in sudden, disappears. One of the men from Security Services catch him on the roof of the hospital, where he threatens that he will jump if they come closer, asking them to bring Jude. Jude tries to reassure that they will get hold of his lawyer, when the man from Security Services walks up behind Agir and all in sudden Agir jumps, dying as soon as he hits the ground underneath.

Tim comes to goes to talk to Rachel when she is in the relative’s room, accusing her of lying about him to everyone, because when hearing about this, his boss had given him an official warning. However, Tim had chosen to resign. Mike notices that Tim is talking to Rachel and walks into the room and Tim leaves. Mike says he will help Rachel, but she wonders what anything can do about the situation. Later on, in the car park, Tim scares Rachel by coming to talk to her, saying he is going to cook her dinner. Mike is also leaving and walks up to them, telling Tim to disappear. Rachel accuses Mike of only making things even worse, saying she was handling the situation. Mike admits that he could not bare it if something happened to her and they end up kissing and leaving together.

* Isabel, fractures right wrist and a piece of a plate in her hand

Two men from Security Servives stop their car in a parking space.

Rachel and Mike are in the car park.

Mike: I couldn’t bare it if anything happened to you. I care about you! Perfect timing, great timing, well done Barratt!

Rachel and Mike hug and share a kiss and go to Mike’s place.

In this article:Cas Series 10, Lisa Evans

S10 E17 (6 Jan 96) : We Shall Overcome by Chris Reason Episode Summary An injured man is brought into A&E by his guilty neighbours,... 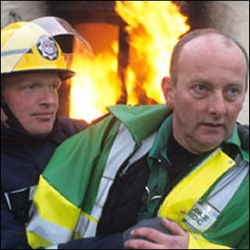 S11 E20 (25 Jan 97) : Treasure by Lisa Evans Episode Summary Andy McKenzie has been made redundant and he is spending his days helping...

S10 E6 (21 Oct 95) : Compensation by Joanne Maguire Episode Summary A boy with cerebral palsy is brought in by his father, while his...