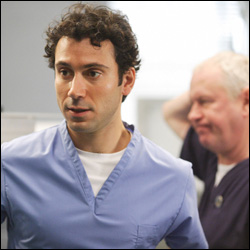 The Emergency Department is in chaos this week. There is noisy building work going on, the lifts are broken and a power-cut hits the department. Jordan and Adam disagree as to whether it is possible to run the ED effectively.

Zoe has had to look after Sharice overnight and is furious when Abby returns to pick her up, saying that she has got back with her abusive partner. Snezana later accuses Abby of stealing her savings.

Elsewhere, a girl from the local estate, who is supposed to be at school sitting an exam, is wandering around, asking for, and taking, drugs – unbeknown to her parents. Her confused state causes a tragic car accident and her parents are faced with the repercussions of her behaviour.

Dixie, meanwhile, confronts Jeff and asks him why he hadn’t told her his wife had kicked him out. He throws it back in her face, however, and tells Dixie that not everything is about her.

Later, Curtis is faced with his past when he sees an old acquaintance dealing drugs. He confronts him and nearly beats him up but, at the last minute, walks away. When Alice asks him what’s going on, he takes her to see his brother’s grave and reveals all about his past.Much to Adam’s disapproval, Jordan decides to perform a highly risky heart operation in the ED. With Ruth and Jay’s assistance, he pulls it off and the trio are elated. Flush with success, Ruth and Jordan celebrate – together.