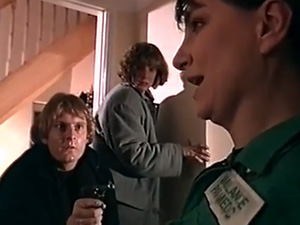 It’s the night shift. Mary is out with the ambulance crew – she’s with Eric and Chris. Eric tells her that the assault charge against him has been dropped so he’s back at work. Mary is hoping for excitement but their first call is to take a diabetic woman home from Queens.

A girl, Cheryl, her friend Jo and Jo’s mum Georgie are having fun on a dry ski slope. Georgie leaves to chat to Cheryl’s parents who appear to be very sensible, whereas Georgie just wants to have fun. The girls are still skiing, until another skier loses control and causes Cheryl to crash into a fence. She is taken to A&E and is fine, but tells her mum and dad that she’s sick of them treating her like a child. She says that she wants to live with Jo and Georgie, and that Georgie has said this is fine.

A man, Mr Jenkins, is treated by Dave and Adele. He is diagnosed with an enlarged prostate.

Charlie comes in to the staff room in a good mood. He tells everyone that at a meeting he has just been to, management have agreed to having two more E grade nurses in the department. Ash isn’t as happy and says that it’s still not enough – their workload is still too much.

A woman, Carly Wilson, argues with her husband Chris before she goes to work. He doesn’t want her to go but she tells him that she has to work since he lost his job. He hates her degrading work – she’s a masseuse. In desperation, he stages a siege at the house where she’s working. Josh and Lucy attend, and Lucy is taken hostage. The couple try to smash their way out of the garage in a car but crash – Carly goes through the window screen and is killed instantly. Chris is badly injured and taken into A&E by helecopter after Mike arrives to assess the situation. Lucy tells a worried Josh that she’s fine.

A man, Bernard Watson, is brought in. He’s lost a large amount of blood and needs a chest drain.

Later, Jane gives Charlie the budget report and tells him he should read it. It’s been changed – Charlie reads that they’re not being allowed the two extra nurses after all. He’s angry that he wasn’t told or consulted sooner. Mike offers his full support. Charlie argues with Jane, and they both lose their tempers. Jane says she’s on his side. Charlie apologises. There’s going to be another meeting – Charlie says he’s not going to bother going. Ash later tries to persuade him that they need him there but Charlie says he’s sick of it.

Holby is full of football supporters. Holby City has won a match 2 –1. The ambulance picks up a woman, Nora Davies. She’s been to Queens – but it’s shut. She says she has a cut to her arm which needs a dressing and she apologises for troubling the paramedics. The ambulance gets stuck in traffic and Nora arrests. Mary proceeds with cardiac massage. She’s pronounced dead at Holby. Mary is very upset and angry, she blames management for closing Queens – she says the woman needn’t have died. She tells Charlie she doesn’t want to work in A&E anymore. He comforts her. Mary later breaks the news that Nora is dead to her daughter. It’s the first time she’s done this.

The football hooligans invade A&E – Mie is hurt in a scuffle and Rachel yells at them all to calm down.

Frankie has arranged a snail race to raise money at the end of the shift. Charlie’s snail wins – but he’s not there.

Carly Wilson – dies when she’s thrown through the window of a car.

[Adele is on the phone in the busy staffroom]

Mike: Charlie…I have in my hand…

[He stops – the office is empty. A message on Charlie’s comuter screen reads: “this terminal is closed due to lack of interest. Mike reads it and sighs.]