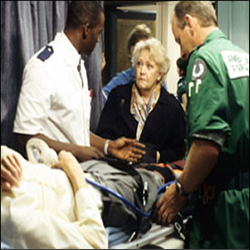 A hostile newspaper article prompts Ginnie Davies from Personnel to ask Ash to leave the hospital. He refuses unless he recieves an official letter of suspension from the Chief Executive. He is angered at being ‘guilty before being proved innocent’.

Adam is happy to hear that his ex-wife Emma has filed for divorced with her partner Glen Quinn.

Michael and Bobbie Croft drive down to see her parents, Edward and Jane with their two young daughters. Jane has been getting bad premonitions. The couple’s car breaks down, so they leave the car and eventually make their way to the house. After lunch, Michael, Bobbie and Jane decide to go and pick up the car, while Edward stays at home with the children. Edward has a scare when he loses one of the young girls, Gemma, and fears she has fallen in the outside pool. His fears are unfounded when she turns up safe, meanwhile his family are involved in a car crash. Both Bobbie and Jane die at the scene, Michael is brought in but also dies in Resus. After being told the news, devestated Edward takes the children home and questions how to tell them the news.

Patrick and Frances Miller return to Holby on a nostalgic visit. They find the house they used to live in as a young married couple, go into the shed and decide to make love. Patrick loses balance and knocks over a shelf, and the old shed collapses on him. At Holby, it is discovered that Patrick has incurable skin cancer – as well as now having a fractured hip, hence the visit to their old haunts.

Kathy Allan comes in with hearing loss because there is an irritation in her ear. Eddie discovers a moth in her ear, but being phobic, asks Ash to remove it.

Ash leaves the department when Ginnie brings down a formal notice claiming it to be for his ‘own protection’.

Michael, Bobbie and their two daughters are driving a long in a car;

Michael (singing along to music) : We’ve had some fun, we’ve had our ups and downs. Been down that rocky road, but here we are still around. We’ve thought about someone else, either…

Georgina : Dad can you turn it down?

Liz and Josh in ambulance;

Liz : Not another one, what is it with people today?

In this article:Andrew Holden, Cas Series 9