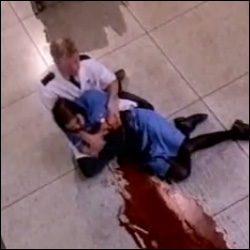 It is time to unveil the mural that Jayne has been painting on a wall overlooking reception. Reporters from local papers are there to write about the event, making the already busy A&E even more busy. Jayne, however, is not there when the painting is unveiled, because on the way there she, in the car park, crashed with her car into the little car of 73-year-old Edith Brown. Edie seems to be fine, apart from being a bit upset, thinking that her partner Marjorie might have cancer. Baz checks Marjorie and says that it does not seem to be cancer and they are both sent home, but Edie is later on brought in again, this time with an aortic aneurysm that ruptures and they cannot save her.

Carol Fisher has taken an overdose and at first she refuses treatment. Later on she is brought into A&E and apparently she has drank half a bottle of antifreeze and they do a stomach pump to try to avoid renal failure. She says that they saved her in vain, because she does not want to live after her daughter died in a car crash, at the day one year earlier. They decide to transfer her to a ward, but there is a little crisis on the way when the batteries the monitor go flat, the sunction is not working and so on. There is some panic among the nurses and they decide to bring her back to resus, only to later on be taken to the ward, this time with equipment that works. When Charlie hears about the equipment not working, he first has a go at Justine, an agency nurse, then at Jude for not checking the equipment as she had been told to.

Noona Raymond is a young girl, who Jude is trying to treat, but she just keeps screaming and her mother is worrying that if Jude makes Noona scream her eyes will go puffy for a photo shoot that she is going to. Another patient is Clifford Rankin, who has been hit by his girlfriend. While Kate is treating him, he starts fighting with his girlfriend over who was the one that started and in the end Ruby Collins, the girlfriend, even attacks Kate. When Clifford warns her that Ruby has got a knife, Kate gets security, but when the Police arrives she says that she does not want to report them, even though the Policeman suggests that they should use them as a warning example.

Ken Summers is a man suffering from cronic manic depression. He thinks that he is an Aztec and has painted his face like an Aztec warrior. He is walking around in A&E, wearing only underpants and scaring everyone by acting strangely and saying weird things. The SHO from the psychiatric ward, however, says that there is nothing wrong with him and that it is his own fault that he is not taking his drugs.

Josh has got the fire service report back. Apparently the fire was due to the pipes in the boiler being damaged and he is now blaming himself, saying that he should have checked them. He also tells Kate that he does not understand why everyone is so nice to him even though he has killed his own family.

A man without any identification dies in resus of a drug overdose and they found other drugs on him as well. He would not give his name, but before he died he gave the phone number to someone called Alice. They leave on message on her answer machine and later on she comes in. She says that it is her stepfather Alan Heyes and she is upset to get to hear that he has died, even though she keeps saying that she is happy that he is gone. Jude takes her to the mortuary to identify the body.

Jude has got a card from Crete and Matt has also sent her a necklace. David, the receptionist, asks her why she did not join Matt to Crete and she explains that it would have been difficult with the work and everything. She tries to phone Matt, but he is not around and the person on the phone seems to know hardly any English. Later on Matt calls the staff room and Charlie answers, saying that Jude is not around and that he should call again in half an hour. Just as Charlie hangs up the phone, someone comes to say that one of the porters has found a nurse collapsed in the corridor. Charlie and Sam go to check, but halfway there the porter comes running to them, saying that he got it wrong and that the nurse actually is bleeding. Charlie and Sam follow him and are shocked to find Jude lying there in the corridor, in a pool of blood.

* Ken Summers, cronic manic-depressed man who thinks he is an Aztec, running around A&E wearing only underpants

* Noona Raymond, a little girl whose mother is worrying that her eyes will start looking weird, as she is supposed to go to a photo shooting

* Carol Fisher, a woman who has taken an overdose of antifreeze

* Edith Brown, a 73-year-old who first is involved in a car crash in the car park, then later on brought in with aortic aneurysm

* Clifford Rankin, his girlfriend has punched his nose

* Alan Heyes, a man who died of a drug overdose and Alice Cornwell comes to identify him

[The first scene shows Josh walking towards his house.]

[Sam and Charlie and walking, pushing a wheel chair, to got to help a nurse that has collapsed in a corridor.]

Porter: I got it wrong, she’s bleeding!

[They all run down the corridor and find Jude there, lying in a pool of blood.]

In this article:Barbara Machin, Cas Series 11