Helena Bosman is readmitted and Diane operates on her. Furious about the treatment Helena has received, her husband, Don, makes a complaint to Ric. During the operation, Diane discovers that Helena’s urethra has been cut but she covers for Nick and keeps quiet by not adding it to her post op report. But Helena’s condition deteriorates and, after another operation, she passes away. Ric is livid and says that there will be an internal inquiry.

[ID 1598]Sam[/ID] and Chrissie are looking after Dillon Ellis, a former alcoholic who is on the transplant list for a new heart. But when Dillon’s results come in and reveal that he has not stopped drinking, Sam bends the rules to get him the transplant (Helen’s heart) by forging his blood results. When Don changes his mind to the transplant, Sam deliberately neglects to stop the operation taking place. Chrissie is furious when she finds out – he tells her he would do the same thing again if he had to. ‘That’s what I’m worried about,’ she replies.

Meanwhile, Justin plays mind games with Kyla, leading her on and then backing off when she shows an interest.

Arjmand is brought in with his overprotective father after collapsing on the football pitch. When he learns he has a hole in the heart, he is annoyed that his father seems more concerned about how it will affect his chances of getting a football signing rather than his health.

* Kyla reveals she used to be an athlete before a hamstring injury forced her to quit.

* Kyla is at first dubious about getting back with Justin, ‘I’ve been there before, I know how it ends.’

In this article:Debbie O'Malley, HC Series 8

Episode Summary The girl, Amy, who was previously at the Family Planning Clinic (S7 E50) wanting a termination and got Donna and Mickie to... 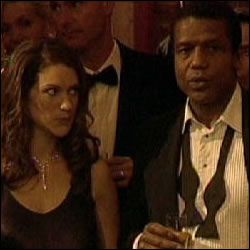 S5 E51 (23 Sep 03) : Just Getting By by Debbie O’Malley Episode Summary Owen and Tricia come back from their holiday. Tricia is dropped...

Episode Summary Diane is back at work but there’s still friction between her and Jac. Ric tells Diane that she should apply for the...