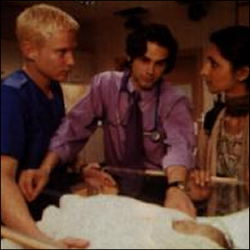 Amy is having difficulty dealing with a woman, Hannah Martin, at reception when an Asian woman, Jasvir Kang, pushes in, clutching a small baby. Sam takes her away to a cubicle which further aggravates the already angry patient that Amy is dealing with.

In resus, Sean and Sam attempt to deal with the semi-conscious baby whilst the Asian mother speaks frantically in a foreign language. Max appears to assist, passing his sandwich to Sam to ‘put somewhere safe’ for him. He suspects the baby may have a chest infection and asks for an x-ray. As an interpreter has still failed to appear they call for ‘Osman’ the bed manager, in the hope that he can understand Jasvir.

Charlie eventually arrives in reception, late after his train was delayed, just as the angry Hannah, who still refuses to sit and wait quietly, lifts a chair into the air. He goes over and asks her name assuming that she has been drinking. Amy arrives to tell him Baz is on the phone, as Charlie talks to Eve he says weekends are very short and when she asks how its going he replies she is getting on ‘brilliantly’. Eventually Charlie shows the Hannah, now accompanied by her daughter Cassie, to a cubicle where she proceeds to push the bed angrily towards Tina, who suggests to Eve that they call social services.

In the headmaster’s office of a local school an aggressive father, Andy Horne, is complaining that the staff are unable to teach his son, Murray, who he claims is ‘no worse’ than any other pupil. Anthea Hinton, the boy’s teacher disagrees, saying that his son is disruptive and tells the father that he carries a knife. The father says it’s only a penknife and becomes more aggressive, insisting he is going to complain to the governors.Adam arrives in resus and explains that despite his skin colour he was born in Birmingham and is as unable as them to understand the Asian woman. Max suggests trying Eve who spent some time in India.

As the children in the school change lessons the headmaster is complaining to the teacher that he can’t afford another complaint. He is worried about league tables and government ‘hit squads’, she points out that they are working in a ‘poverty zone’.

In resus the x-ray has failed to reveal the cause of the baby’s problem and they are still unable to find anyone who can talk to the mother.

In a cubicle, Mark begins to treat Bonnie Russell who was brought in earlier by Penny and Josh with bruising to her face and body after being spotted lying unconscious on the kitchen floor by a neighbour. Chloe remarked that it looked as if she had been punched and as Mark asks her how it happened. Mrs. Russell bursts into tears.

Charlie is now treating Hannah who says she never wanted Cassie and struggled to bring her up alone. She admits that she is pregnant and ‘doesn’t want to be’. Charlie tells her to see her GP but the woman insists that being 16 weeks pregnant is an emergency. Security arrive belatedly but Charlie tells Amy they are no longer needed as he goes to collect Cassie from his office.

In reception Amy is phoning the police to ask for an interpreter for Mrs. Kang. As she does so she shows Sam and Sunny the photograph of the scan of her own baby. In the background a father who has been waiting with his son for sometime is seen pacing up and down and he approaches Amy to ask if the waiting time shown on the board is correct.

George is now treating Mrs. Russell who still insists that she doesn’t know how it happened but is obviously dismayed when George mentions surgery. George reassures her that there is nothing to worry about and as she walks away Mark follows her. She asks him what time he will be round tonight and he later explains that he can’t make it.Dave Hancock tries to persuade his son Joe that they haven’t got time to wait any longer. Dave is concerned about the time Joe is missing from school and asks if he’s sure he’s not putting it on. Anxious that he is going to be late for work Dave persuades him to call into the GP that evening instead and they leave.

Charlie asks George to see the pregnant woman, concerned that she may be more than 16 weeks pregnant In the cubicle the woman leaves Cassie, telling her she is going to the loo, but after checking that nobody is around she leaves the department.

Murray is sitting in class inspecting an open penknife. The teacher tells him to put it away but as he continues to taunt her she leaves the classroom in tears, pushing past the headmaster as she runs down the corridor.

Nick Worthington has been brought in with two friends, Leo and Leila, but after being wheeled into a cubicle he tells them he wants to leave. Leila insists he stays, saying he was ‘up for it’ an hour ago and that it will be a laugh and as Sean arrives to treat him they leave. Despite his complaining of stomach pain Sean is unable to find anything wrong with him but suggests an x-ray. As he leaves the cubicle we see Leila going through the drawers in the office. As Eve appears and moves them on she passes a bundle of what appear to be syringes to Leo, telling him to put them in his pocket because there is more room than hers. A little later Nick is seen leaving the department fully clothed.

Dave Hancock drops Joe off outside school after scribbling a note for his teacher. As he goes in the boy meets a friend, Keeley Smith, and tells her that he overslept. She tells him about Murray’s behaviour in class. As they talk asks if he has seen his Mum and he says ‘Murray can have her’. Murray comes along the corridor and confronts the boy with the penknife and threatens him. A few minutes later the school caretaker is seen padlocking the emergency exit after some pupils used it as a short cut. Along the corridor Murray catches hold of Joe and the headmaster breaks up the tussle between them.

Mark is checking Mrs. Russell’s x-ray and tells her she has a fractured cheekbone. When Chloe tells her that her husband is on the way she asks them to tell him that he can’t come. As George goes to treat the pregnant woman and discovers she has gone Sunny also discovers that Nick Worthington is not in the cubicle.

At the school a supply teacher, Mrs. Brimlow, is trying to cover for the upset Mrs. Hinton’s class and after setting work she leaves Murray’s class and returns to her own. Anthea is in the headmaster’s study insisting that she refuses to teach the class until Murray is removed and accuses the head of not considering the other children. A fight breaks out in the classroom and as Murray chases Joe along the corridor he is stopped by the caretaker. As the caretaker sends him back to class Murray threatens to tell the head about the ‘girls’ toilets’ and behind him Joe sneaks into the caretaker’s cupboard which is stacked with paper and cleaning materials. Hearing a noise he jumps up from the sofa, knocking a tin of lighter fuel onto the seat. The caretaker returns and lights a cigarette which falls onto the sofa as the head calls him from the corridor. As the caretaker returns for his keys Joe manages to get out through the still open door as the sofa begins to smoulder. Peering round the classroom door he sees Murray arguing with the teacher who, spotting Joe, runs his fingers across his throat in a threatening gesture towards him. Joe runs back to the caretaker’s office and sits on the floor as the sofa bursts into flames. Moving towards the door he finds it locked. As he attempts to get out the other children spot smoke and the supply teacher goes to investigate before setting off the fire alarm. Josh and Penny receive the call as the children are evacuated from the building. Finding the emergency exit locked Mrs. Brimlow leads the children to a room for safety.

In resus, Max is continuing to investigate the baby’s condition as the interpreter, Ravi, arrives. As Sam puts him in the picture, Ravi explains that he may not be able to find a common language. He makes some progress in communicating with her and as Max continues to struggle to diagnose the baby’s condition Sam touches on the question of gas heating, suspecting carbon monoxide poisoning. Max congratulates Sam for his forethought and as he confirms the diagnosis arranges to send the baby up to Paediatric ITU, asking Ravi to inform the mother of the baby’s condition.

In the office Tina and Eve are attempting to trace Cassie’s mum who eventually mentions her Dad. As Sean searches the drawer for syringes unsuccessfully Eve tells him to get more from the stores. Sunny is still searching for Nick.

In the staffroom Tina and Chloe are making coffee, as Sean joins them Tina is complaining about the state of the sink, comparing it to the mess she has to live with from Sunny and Sam. Sean offers to tidy up and they comment on his ability to clean up. As George hands a patient over to Sunny he makes arrangements to meet Mark that evening and George realises why he can’t see her. The flirtatious banter between Sunny, Sean, Tina and Chloe continues unabated.

Mr. Russell arrives to see his wife but as Chloe shows him to her cubicle she too has disappeared. Chloe eventually finds her in the toilets where she hands Chloe a handbag containing some jewellery while she admits that someone hit her.

Nick Worthington is seen being dragged along the road, semi-conscious by his friends.

As the fire crews and ambulances arrive Anthea Hinton is seen trapped under rubble whilst the caretaker stands watching the scene from the street. The headmaster is unable to trace all the registers and Mrs. Brimlow attempts to safeguard the trapped pupils. Joe and Keeley are sitting on the floor in the toilets as the fire crew attempt to locate the missing pupils.

As Cassie’s father arrives at the hospital to collect her he phones his girlfriend to explain what has happened. He loses control of his vehicle as he swerves to avoid Leo and Leila carrying a semi-conscious Nick across the road, crashing into the car carrying the medical team to the fire scene. Mark and Julie are trapped inside.

* Eve spent some time in India.

* Adam Osman was born in Birmingham.

* Max’s first words: “Put that somewhere for me,” passing a sandwich to Sam.

* Chloe has been working in A&E two weeks.