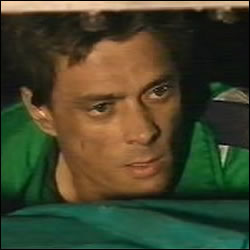 New paramedic Luke Warren arrives on the scene looking rugged and ready for action. He is thrown in at the deep end on his first day when he is trapped in the cellar of a house with teenage girl, Samina, after a gas explosion rips through and destroys the rest of the building. He bravely performs a life-saving procedure with guidance from Lara, who calls instructions through the small window. Though they have been sparring all day, Lara is quite taken with his cheeky arrogance. The girl in his care recognises him as an ex-footballer and she is not the only one surprised to see him in his new role. Bex is shocked when he turns up at reception but immediately puts him straight about why they are no longer married.

She is her usual catty self towards Jack, too, when he returns as janitor, finding him disgusting jobs so that he doesn’t get illusions about usurping her as receptionist. Jack is understandably worried on the day of Tony’s transplant operation. Everyone is tense but as Tony and Eddie are wheeled off, Nikki comforts Jack and even lets him kiss her.

Colette informs Charlie that she’s four months pregnant. Lyn demands that Anna tell Merlin the truth and Lara confronts Harry, suggesting his behaviour is causing patients to suffer. She tells him he must not isolate his family because he feels guilty.

Harry is in his office, reading a letter from Tally, she says;

Tally : You’re meant to be my Dad. It’s not my fault Mum has gone or yours. Your so mad at me, blaming me – I miss you, like you used to be, my Dad.

Jack and Nikki are sitting outside A&E;

Jack : I could lose them both couldn’t I?

Nikki : Jack look at me, it’s gonna be alright.

Tony and Eddie both face the operation