The hospital advertises a new associate specialist position. Maggie is furious having recently had her new Consultant’s job cut. Charlie is left to tell Selena the news and she is at first adamant she will not be applying and has a go at Nathan, however she later changes her mind which is bound to cause friction between the two friends.

Meanwhile Abs treats patient, Adrian, who happens to be the guy Kelsey’s been dating. He has a shoulder fracture from playing rugby but is also found to have herpes. Adrian says he has no plans to tell Kelsey, Abs struggles over whether to tell Kelsey, but decides that he must let her know.

Elsewhere, Ellen surprises Nina and Abs by buying them a camper van to thank them for their support and then suggests that they move back in together.

Teenager Joey has run away from home with his deaf friend, Vincent. In a disused farmhouse, the boys fall through floorboards. Joey is trapped so Vincent calls for help before collapsing outside. Maggie is called out to help rescue Joey whilst Greg discovers Vincent. Joey is found to have given his mum an overdose but she is brought in alive.

Elderly Margaret is brought into the department with her overbearing husband, Peter, who was a doctor. She has an immune disorder and Selena discovers he has been treating her himself and neglected her real symptoms. When she arrests and dies, Selena tells him he faces severe consequences.

In this article:Cas Series 20, Jo O’Keefe 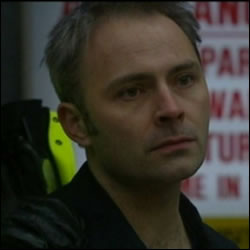 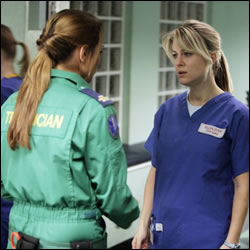 S20 E31 (1 Apr 06) : Going Under by Ming Ho Episode Summary Ellen tells Harry she hasn’t heard from the oncologist but really has...