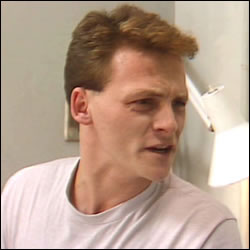 STORYLINE : An athletic young man, Marvin, complains of leg pain, saying he injured it playing judo. He won’t let any woman investigate, and tells Duffy to ‘piss off’. When Clive sees him, he reveals to have a boil on his bum. Baz treats him, while Duffy and Susie come in to make fun of him.