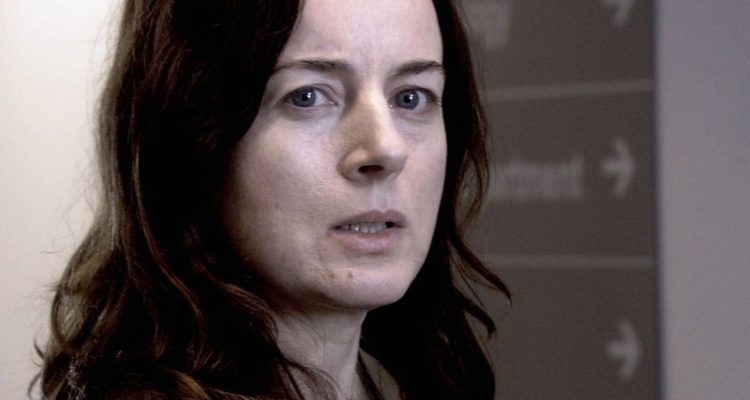 After nine months of playing psychotic doctor “mad” May Wright in EastEnders, Amanda Drew hung up her stethoscope. Now, in a storyline arching over episodes four, five and six of HolbyBlue, Amanda is playing mild-mannered Judy Burrows.

The polar opposite of “mad May”, Judy is a woman trapped in a violent marriage with a controlling and brutal man. After her husband, Sean (Kevin Doyle), comes home to find that their son, Lee (Robert Lowe), has skipped school, Sean vents his anger on their timid teenager. After years of both witnessing and suffering abuse from his father, Lee finally explodes, giving Sean a taste of his own brutal medicine.

CID arrives at the scene to find Sean unconscious in a pool of blood in what has clearly been a violent attack. Lee is taken into custody and Judy is torn between protecting her son and protecting herself. With the terrified Judy as his only witness, Lee is at the mercy of his fearful mother who is the only person who can save him from a long-term jail sentence. Amanda talks about her character – and about having to throw up to order…

Who is Judy Burrows?

She’s been married for about 20 years to a man called Sean and they have a son. During the course of her marriage she has become enveloped by the strength of her husband’s personality and the powerful control he has over the family.

Judy is a shell of her former self and isn’t aware of the hold he now has over her day in, day out. She’s now a very introverted woman without a great deal of social connection with other people. Judy and her family have moved about a lot, so she hasn’t really been able to form strong bonds with anyone outside her own family. She cares very deeply for her son, but is locked into this abusive relationship. I feel she’s a very silent soul and somebody who’s had to keep a great deal of trauma to herself.

Looking at her, you wouldn’t know that she feels the level of tragedy she does. Her way of dealing with the trauma is not acknowledging it to herself, let alone anyone else; Judy chooses not to focus on her situation so it’s almost as if she’s in a trance.

How does her husband, Sean, know the officers at Holby South?

Sean is a social worker and so he knows them through his work; he has a good reputation at the station but he is a very different character at home.

Sean has a lot of pressures at work and uses his family as a let-off valve. Obviously, there is no excuse for his behaviour; the man is in serious need of help.

How does she deal with Lee’s reaction to Sean’s abuse and his subsequent arrest?

After having suffered years of abuse at the hands of his father, and also having watched his mother being abused, Lee just snaps and fights back. His retaliation puts his mother in a state of shock; Lee has never reacted to the hurt before and she doesn’t quite know how to deal with it. Her main concern is to save her son from any further abuse by not inflaming her husband. But she’s powerless and impotent and doesn’t know how to help. She feels the only way to do that is by taking her husband’s side in the hope that she can appease him. Judy’s put in an awful dilemma where she can’t appear to be on her son’s side and defend him to the police because she feels it will ultimately cause a great deal more trouble.

Why didn’t she leave her husband a long time ago when this all started?

Viewers will be shouting at her to “get out and leave the bastard”! Unfortunately, that’s not a possibility for Judy; the control that Sean has over her is a very sophisticated level of manipulation. It began in the most insidious and small ways, then it gradually grew into something obscene. Of course, by that stage, she had already become enmeshed in his web of control.

In episode six, CID finally manages to break Judy’s wall of silence. How do they get through to her?

They pretend to be friendly with Sean by visiting him in hospital and feigning concern for his welfare. Judy buys that entirely, since her husband has probably told her on many occasions how much he is liked by everybody. When she sees him with the visiting officers, she realises how successful his facade is and she worries that she wouldn’t have a leg to stand on if she exposed his real personality.

Judy eventually finds the strength to stand up for her son. Where does that come from?

Strangely enough, Judy finds strength when she’s at rock bottom and she just snaps. Either she stays with her awful husband whilst her son goes to prison, or she risks more violence from her husband by freeing her son. Ultimately, the choice between the two is so minimal in terms of pain she eventually breaks; luckily, she finds the power to report Sean which is a hugely brave thing for her to do.

With such heavy storylines, did you have any fun filming HolbyBlue?

Even though it was a heavy storyline we did have some fun when my character had to be sick! I had to take a mouthful of various unpleasant things all mixed together to make her look like she was really being ill. In the end, the production team used apple juice mixed with porridge oats to give it some substance!

Does May have any plans to return to Albert Square?

There is a possibility of returning as May because she didn’t die. I’m always very surprised at how much the public react to me after EastEnders. The show is so popular and people instantaneously recognise me from it.

How does Judy compare to May?

As an actor, you’re always keen to vary the different kinds of roles you work on, to try to play as many different characters as possible, especially if the characters go through such extreme emotions and circumstances; that’s one of the reasons acting is so enjoyable.

May’s character has such huge determination she’ll stop at nothing to get what she wants, which is her main downfall since she became overly controlling. Judy, on the other hand, has no will of her own and is at the mercy of her husband and unable to control anything.

No Comments on "Amanda Drew Interview"