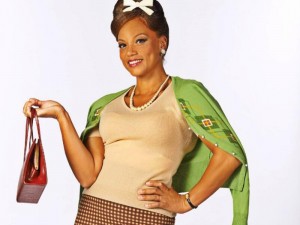 Angela in ‘One Man, Two Guvnors’

Former HOLBY CITY actress Angela Griffin has joined the cast of ‘One Man, Two Guvnors’ for the show’s final six months at The Haymarket in London.

Angela, who played original cast character Jasmine in the medical drama, has starred in a number of popular TV shows including Coronation Street, Cutting It and Mount Pleasant.

She began performing this month in Richard Bean’s award-winning play which is described as a glorious celebration of British comedy – a unique, laugh-out-loud mix of satire, songs, slapstick and glittering one-liners.

She plays the role of Dolly alongside cast including Kelly Shirley and Peter Caulfield.