Anna Mountford played Outreach nurse Keri McGrath during Series 3 and 4 of HOLBY CITY. Her character storylines included Keri accusing colleague Liam of raping her and a love triangle between Keri, her mother Pam and Mubbs. Anna talks about her time on the show and what she’s up to now since leaving…

Did you enjoy playing the character of Keri? What were your most memorable storylines/ moments to film?

I enjoyed my first year as Keri very much and my second year less so. Although the rape storyline was very memorable to film and was in my 2nd year.

Can you remember your first scene/ words filming on HOLBY CITY? Were you nervous when you first joined the show?

Not really but it’s always great to bump into them and catch up from time to time.

Did you take any keepsakes with you from your time on the show?

Some clothes and shoes and my name tag.

What have you been up to since leaving HOLBY CITY?

Getting married and having a baby. Filmed two series of ‘The Giblet Boys’. I am currently packing my life up for a move to the USA where I hope to continue working.

You’ve appeared in children’s TV show ‘The Giblet  Boys’ which is of stark contrast to HOLBY CITY – was  this a fun show to work on?

The Giblet Boys was immense fun. I loved it! I have very  fond memories of the whole thing especially because I  was able to shoot Series 2 eventhhough I was seven  months pregnant.

No I gathered no real knowledge. I would be OK in an emergency involving my son though.

Always have admired Meryl Streep and Miranda Richardson. And I think Reese Witherspoon is great.

I have no spare time since becoming a mum! 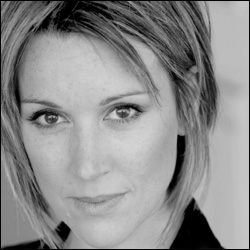 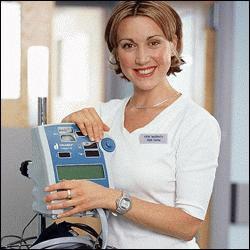 Played by Anna Mountford Appearance S3 E2 ‘Too Much Too Young’ – S4 E41 ‘From This Moment On’ Job Title Outreach Nurse First Words...