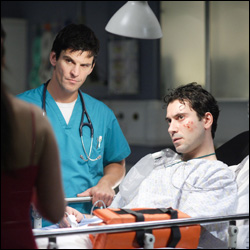 STORYLINE : Sam is on his stag night with a group of friends. As Sam leaves the club, however, a figure watches in the darkness and his mates later find him curled up, unconscious and bleeding. At hospital, Adam discovers he’s been raped.

10 years ago today on #Casualty .. @iamBenTurner appears in a hard hitting guest storyline before his role as Jay .. #htvthrowback @TristanGemmill pic.twitter.com/8Ij5Lc7GB6