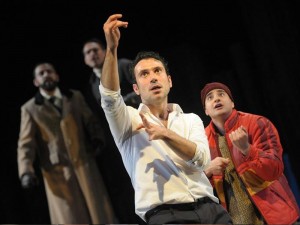 Ben Turner  is currently winning rave reviews for his performance in theatre production ‘The Kite Runner’.

Ben, who played nurse Jay Faldren in CASUALTY, has already performed the show at Nottingham and Brighton and will continue to perform the show at the Liverpool Playhouse between 13th June – 6th July.

Based on Khaled Hosseini’s hugely popular international best-selling novel, The Kite Runner. This haunting tale of friendship spans cultures and continents and follows one man’s journey to confront his past and find redemption.

Of audiences response to the play, Ben has been bowled over by the positive feedback he has been receiving. Speaking with whatonstage.com he says ‘We’ve had standing ovations, we’ve had people cheering and screaming pretty much every night. I’ve been on stage now for about 12 years, I love the theatre it’s sort of where I was born really and I’ve never heard as an actor – there’s a chunk at the end of the play when I talk to them about what happened – and I’ve never heard silence like it.’

Ben, who plays the character of Amir is on stage for the entire performance and his hopes are for the play to eventually reach London.

To read his full interview with whatsonstage.com click here