With CASUALTY celebrating it’s 20th anniversary in 2006, viewers were in for some special treats. 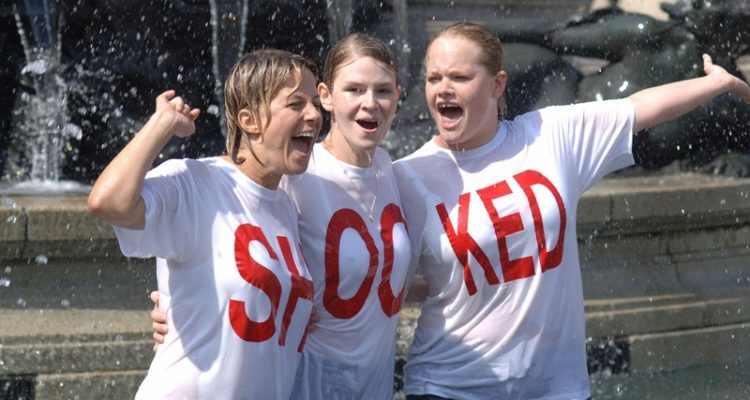 With CASUALTY celebrating it’s 20th anniversary in 2006, viewers were in for some special treats, including two guest returns (with another planned for next year) and ending the year with one of the best and unique episodes ever made. holby.tv take a look back at a memorable 2006 as we also look forward to a promising next year which potentially sees CASUALTY back on top form…

1. Ellen Cancer – CASUALTY’s most memorable storyline this year would be noted as Ellen’s traumatic cancer ordeal. Back in February, Ellen thought she was pregnant after a brief romance with Consultant Harry. However things turned out to be more tragic when she discovered she was actually suffering a molar pregnancy and was infact suffering from cancer. Viewers were taken through her ordeal, from her step-sister Nina chopping off her hair, chemotherapy and staff learning of her cancer, through to her eventual all-clear at the end of Series 20. Of her portrayal, actress Georgina Bouzova said, ‘It is always great to be given the challenge of playing a great storyline, but I was also very nervous as it is such a serious issue that I wanted to make sure I was playing it as honestly and as carefully as possible. It’s something which affects a lot of people.’

2. Christmas Thriller – Promising to be some of CASUALTY’s best episodes to date, the two-part Christmas episodes did not disappoint. Written by Waking the Dead creator Barbara Machin, a day in the life of Holby was shown by three different perspectives; Josh, Ellen and guest character Laura. By the end, Josh had been left stabbed in an ambulance by Laura and Ellen was shockingly hit by a biker and was unable to be saved by her colleagues. ‘The profile of this particular episode is getting back to how it was – getting back to pure old drama,’ said Ian Bleasdale, who plays Josh.

3. Cambodia Special – In September 1986, CASUALTY was born and 20 years later the show celebrated with a two-part episode set in Cambodia and also seeing the guest return of much loved character Duffy. Having set up a clinic in the Asian country, she calls upon Charlie and his colleagues Abs, Guppy and Comfort to help. ‘We wanted to do something special to mark the 20th birthday,’ revealed producer Jane Dauncey. ‘Sending our team to Cambodia seemed a good way to celebrate the traditional values of CASUALTY, while highlighting that the show is still very keen to break new ground.’

4. Guppy/ Dad death – SHO Guppy has had a tough time with his family over the last few years. Having been disowned by his family following his father, Jas, being forced from his job in the hospital after misconduct. Next Guppy finds himself attacked after standing up to racist thugs who’ve targeted an Asian family who come into the department, next on their target list is his father. Jas is more seriously injured and is also later diagnosed with a terminal brain tumour. Guppy is then put in the unenviable position of being asked by his father to help him die. Guppy is in turmoil as he toys with the idea of granting his father’s wish and even confides in Harry but when Jas is found dead after suffocating himself with a plastic bag, it leaves Guppy with a huge burden of regret on his shoulders.

5. Abs/ Nina – Nina exit – One of the show’s best loved couples but also one of the most on-off couples, however with the impending departure of paramedic Nina Farr, their relationship turned sour. Feeling frustrated with her life – both work and in love, Nina finds herself dumping Abs and quitting her job as a technician. She bows out as she began in true Lara Croft heroic style by rescuing a young boy from a barn fire.

6. Sean’s return – SHO Sean Maddox returned to Holby for five episodes of Series 21 following a five year gap. Fans were disappointed to learn that he had split from nurse Tina who he had left to Australia with, however romance was round the corner when he fell for paramedic Comfort. Fragile from previous relationships, Comfort was hesitant about falling for his charms but eventually the pair left Holby together. Whether or not stalwart fans of the show were pleased that it meant it wasn’t happily ever after for Tina & Sean, his return still made memorable viewing.

7. Luke / sol exit – Paramedic Luke Warren left the show last Summer after three years on the show. His last storyline involved him befriending a youth, Sol, who was a keen footballer. However when Sol gets caught up with his friends drug dealing, events lead to Luke being involved in a dramatic shoot-out. He later decides to quit Holby to train football in Africa. ‘It’s quite a sudden thing, but it’s an opportunity for Luke to do what he’s always wanted to do in life – give something back.’

8. Maggie husband/ kids – Last year viewers uncovered she had an estranged husband in prison which had many implications for Maggie and her children; her son Jamie who had been told he was dead. When he is released and wanting to spend more time with the teenage children, Maggie faces the agonising decision of letting them spend a year with him in Malyasia.

9. Bruno’s dodgy dealing – Viewers loved to hate nurse Bruno Jenkins who breezed into the department and was bound to eventually be caught in the department following an array of dodgy dealings including fake prescriptions and getting money for piercings. Bruno tries to make his escape when he realises he has been found out after an elderly woman is taken ill after using fake prescriptions given to her. But he is arrested before being able to make his exit. ‘My final scenes were brilliant to do’ revealed Mark Bonnar.

10. Hospital closure – When the hospital is faced with closure, the team decide not to give up without a fight. Harry appears on local television with an MP whilst Ellen ropes in Alice and Kelsey to jump into a fountain to raise media awareness. Meanwhile with Nathan being offered a job at the super-ED, his loyalty is not where it should.

1. Georgina Bouzova (cancer/exit) – Popular Georgina ended her stint on Casualty with a fantastic final year of storylines which proved her acting abilities. A traumatic cancer ordeal, Georgina was determined to make the storyline believable. ‘There will be a lot of people with cancer watching the show and I wanted to do the storyline justice, to make it as truthful as possible.’ In one of CASUALTY best-kept secret storylines, her exit proved a shock when she was hit by a biker and was tragically killed. For this reason her final performance in the Christmas episodes were also memorable.

2. Elyes Gabel (dad) – Elyes Gabel put in a strong performance as SHO Guppy who was faced with a moral dilemma when his terminally ill father asked him to help end his life.

3. Ian Bleasdale (Xmas) – His character often left in the shadows after such a long reign on the show, it might have been easy to forget what a brilliant actor Ian Bleasdale is. His portrayal of Josh over the Christmas episodes were fantastic particularly the harrowing scenes where he is found collapsed in the ambulance with a stab wound to his neck. ‘I particularly like the fact that I’ve got a lot to do!’ Ian joked of the episodes. ‘And it’s undoubtedly one of the best storylines I’ve done in 15 years’.

4. Rebekah Gibbs (Ellen’s cancer) – Rebekah Gibbs is also noted for her performance in Ellen’s cancer storyline. One of the most memorable scenes between the once feuding sisters, Nina helps Ellen to cut off her hair before the chemotherapy takes hold. A scene which had to be done in one take only due to it being Georgina’s real hair they were cutting off! ‘The topical story with Ellen is some of the best work I have done to date,’ said Rebekah. ‘Georgina and I have worked really hard on it’.

5. Simon MaCorkindale (Ellen’s death) – Two scenes that had us reaching for the tissues during the Christmas episodes were that involving Consultant Harry. After a brief romance with nurse Ellen and following her cancer ordeal, Harry had always maintained a huge bond with her so when he found himself unable to save her following her injuries suffered from being hit by a biker, he was unable to call her time of death. A poignant scene also saw him cleaning her up following her death. A moving performance by Simon MacCorkindale

1. Harry & Ellen – At first a seemingly unlikely pairing, end of year scenes have cast them now one of the best couples of the year. Their meeting brought on by Ellen’s need of a father figure and Harry’s loneliness since becoming a widower, the couple had a brief romance before the pressures of a Consultant/Nurse relationship put kill to their romance. When Ellen thought she was pregnant – Harry even offered to do the right thing by proposing to her but the pair kept a close bond when he eventually found out about her cancer diagnosis and when she died, it was clear he had strong emotions for her still.

2. Abs & Nina – The year started on a high when Abs tried to win back Nina by doing the full monty with some strippers to put some spice back into their relationship. However their romance slowly deteriorated and Nina, feeling stuck in a rut with Abs, ended their relationship and quit Holby – leaving Abs pining.

3. Nathan & Selena – After a brief fling earlier in the year, Selena called time on their romance when she felt he was not giving her the emotional support she needed. Later in the year, Selena acts as his confidant when he reveals he may be HIV. Tests prove otherwise and the couple get their relationship back on track despite the unapproval of other staff members.

4. Alice & Guppy – Since shy Alice joined the department in April, it was clear she had a crush on SHO Guppy but she felt like he didn’t even notice her particularly as he didn’t seem to get her name right for the first few months she was there! When Kelsey realised her crush, she tries to make Alice make some braver moves in an attempt to get Guppy’s attentions but she’s yet to get her man.

5. Sean & Comfort – With Comfort about to make her exit from the show and a long list of traumas surrounding her time in Holby – enter Sean Maddox who was about to whisk her off her feet and give her a happy ending. But was she ready to fall for him so quickly? At first hesitant, but on the persuasion of her friends, Comfort realised she had to follow her heart.