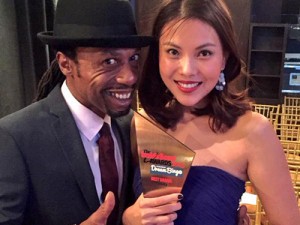 CASUALTY has won ‘Best Drama’ at this years Inside Soap Awards, proving after 30 years it’s still at the top of it’s game.

Crystal Yu (Lily) and Tony Marshall (Noel) picked up the award on behalf of the cast and crew at the event which was held at the DSTRKT in London on 5th October.

Producer Oliver Kent added, ‘Team Casualty was utterly delighted to win the Inside Soap award last night. Massive thanks to everyone who voted for us!’