There’s been a number of changes at the top for both CASUALTY and HOLBY CITY.

In CASUALTY, Lucy Raffety (above photo) has been appointed new Series Producer – taking over from Erika Hossington (2011/ 2013-17).

Lucy has worked as a Producer and Story Producer on CASUALTY since 2007. She has also been a Script Editor on The Bill and Waterloo Road. 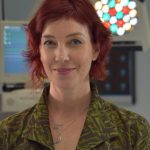 Meanwhile on HOLBY CITY, since Simon Harper being appointed to Executive Producer – Kate Hall (right) was appointed as Series Producer on the show in June, having worked on the show previously since 2013.

Kate recently did a revealing spoiler interview with Digital Spy.