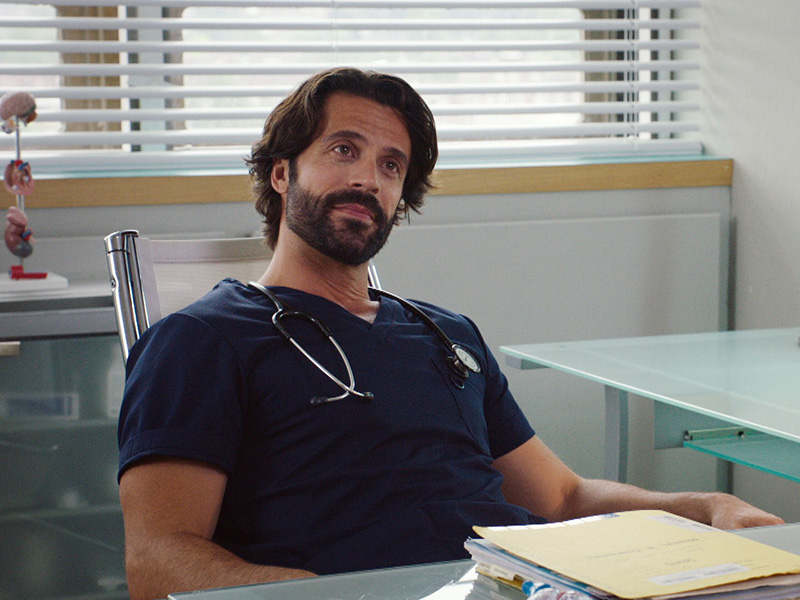 Italian actor Christian Vit joins the cast of HOLBY CITY next week as new Consultant Matteo Rossini. He talks to holby.tv about his upcoming role…

Are you excited about joining the cast of Holby?

I’m very excited to joining the cast of Holby!

It’s your first major British long running series role, what about joining the show appealed to you?

Joining such a popular and well respected series such as Holby City appealed to me and it’s a great opportunity as an actor.

What can you tell us about your character Matteo?

Matteo is deeply in love with his job and fascinated by art and beauty in their different manifestations. Of course he is a very passionate man, ironic and always ready to put a smile on top of everything he does. He likes to break sometimes conventional rules and he is not afraid to get into unexplored off pists to achieve the results.

In his first scene, how are we introduced to him?

The introduction scene of Matteo is exactly as the character is: very Mediterranean, romantic, passionate and assertive. And I’m not going to spoil it before it gets aired on his first episode!

Who does he bond with from the team? Any potential romances for him in the future?

His charming attitude allows him to get easy allies with the staff he works with and of course there will be space for romances.

And is there anyone he is likely to conflict with?

When Matteo is around, you can really feel his presence: he literally makes himself home anywhere, his attitude could be annoying to someone…..

Since my very first day I had the feeling I was joining a big family. They all welcomed me in such a nice and warm way.

I have been very impressed by how realistic things are when we film the scenes in the operating theatre. Unexpectedly I’ve found myself not fazed at all but very interested instead.

Considering that many medical terms derive from Latin, being Italian my former language makes the learning easier for me.

Have you done any job shadowing in a real life hospital in preparation for your role?

Yes, I shadowed a surgeon in a real life hospital to prepare for the role. Luckily I didn’t happen to faint looking at real operations.

My family and close friends are very excited and can’t wait for watching me in Holby’s episodes. They’ve always been very supportive, especially my family.

Have you always wanted to be an actor? How did you get into acting?

I played my first pantomime at 6 years old and I always had a connection and a special feeling about acting: it was a passion other than a job. Along the way I had the chance to accomplish different studies and to explore different jobs but I always knew sooner or later I had an appointment with my passion waiting for me. It happened one day several years ago and I just made the decision to go for it!