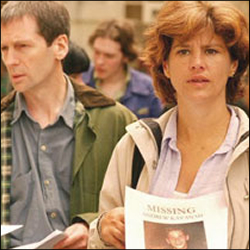 STORYLINE : Jenny comes in with a bite mark to her thigh. Duffy spots she has hepatitis, and tries to get her to stay, but she discharges herself. She is later brought in dead on arrival after being beaten up.

STORYLINE : A drunk Grace, who was recently discharged from the hospital returns to the hospital when her teenage son is involved in a bus crash. When their social worker is later brought in after falling down steps and being attacked, her son tells Maggie that his mother is the culprit.