Casualty returns this week to celebrate it’s 30th anniversary with a spectacular feature length episode and what better time to reunite Charlie and Duffy in the midst of the drama.

Derek Thompson, who plays Charlie and Cathy Shipton, who returns as Duffy, both appeared in the show’s first series, 30 years ago. Whilst Derek has remained, to be the show’s longest serving cast member, Cathy appeared in the first eight series, taking a break before joining again between  Series 12 – 17. She returned briefly in 2006 for a special set in Cambodia and after a well received guest appearance last year is set for a full return to the show.

There’s still a special chemistry between Derek and Cathy, their fondness of the show and it’s success that they hold Casualty’s first producer, the late Geraint Morris, greatly responsible for. They talk to holby.tv…

Cathy : It’s great. As you know I already dipped my toe back in the water last year and it’s built from there really.

People say it’s like being back, that it sounds like it’s going backwards. But this is forward, the whole thrust as far as I can tell, the set here, the shooting, the story opportunities, the way co-creator Paul Unwin conceived the character and that we are all growing and maturing.

Last year’s appearance, that tickled the public a bit and it continued in that it has taken the character on a journey, so it’s definitely a forward. That’s exciting!

Derek : What you get about the two of them getting back together again is the audience got a real boost out of that, as we did!

Casualty has a real family feel to it, doesn’t it? 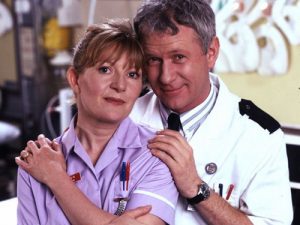 Cathy : It’s a work family undoubtedly. And for Geraint who set this up, who knew 30 years later it would still be going as strong as it is, if not stronger.

Derek : He put it there. This is his inheritance, the model that he set up. He didn’t do it from a business sense, he did it from the heart.

Within the first couple of episodes, on the first series there was a family of actors there, and that would do almost anything for you. Geraint was wise in the way that he would cast it as well, all romantic actors which is something that they’ve stuck with. Because romantic actors can handle all the distress and notion of survival which is what this is all about. But that they can also handle moments of comedy and stretch themselves. He didn’t really cast to type, he cast versatile actors.

Cathy : And again all from instinct. When I joined, I was all wet behind the ears in terms of my career and it taught me a big lesson about backing your instincts.

Derek : After we did the read through when we first started, our jaws dropped as Geraint made this speech that said ‘It’s yours, take it, have it!’ It’s all about trust.

Cathy : It did feel very maverick!

With Casualty celebrating it’s 30th year, is this an opportunity for you to take stock and reflect?

Derek : There’s a little bit of a thrill to it . We are capable of the most enormous amount of denial – I still think that I’m 18 in my head!  But actually seeing those various stages of Charlie through the years, it’s quite rewarding because this show has actually been through several generations.

And it’s been successful in every generation I think and that’s on my mind, that it’s not just a linear thing. It’s an achievement.  I get a sense of the effort that went in from all those people to making the show, such a phenomenal effort.  You have got people here, who work on this day to day who never get an expression of thanks from an audience, which is a sad thing, because everybody gives 110% into this show.

I had an enormous experience in television, theatre and film before I came into this show and have been very lucky in my working life but I’ve never felt that kind of absolute involvement in people like on Casualty.

Cathy : Coming down into that atmosphere – there’s co-operation, there’s fun and even Rosie Marcel (who will be making a guest appearance as Holby City’s Jac Naylor in the special) was saying she noticed the real team effort here and a buzz, a collective sense of humour. Everybody does the work, but there’s a real humanity to it.

Casualty fans are gearing up for one of the show’s landmark episodes to be screened tonight – as we say farewell to iconic Duffy....