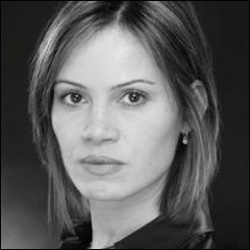 PARENTS : Her Jamaican mother, Margaret, who was 17 when she had Donna. Her father, John (part Norwegian/part Welsh) left the family home when she was a baby, he now lives in Huddersfield. Only child Donna, says of her mother, ‘I’m immensely proud of her, she always worked hard.. and we’ve always had a great relationship.’

QUALIFICATIONS : Donna left school at 16, with just GCSE’s. She then went to college and got a secretarial qualification.

TRAINED : After going back to Jamaica to see if she could make a life for herself there, things didn’t work out, so she took stock of her life and returned to England, applying to drama school, she got a place at The Arden School of Theatre.

ON HER CHILDHOOD : ‘I was definitely insular as a child and didn’t have a lot of friends’

ON HER PERFORMING ARTS COURSE : ‘The course was amazing but there were real highs and real lows – to be an actress you have to be able to tap into your own emotions and life experiences and because of that I learnt alot about myself.’

ON CHARACTER PENNY : ‘She keeps a bit aloof from people, but she’s very strong. I can’t imagine anyone taking advantage of her.’

RESEARCH FOR CASUALTY : ‘That was exciting because you really don’t know what’s around the corner.. luckily I’ve never been squeamish and that made me even less so. It teaches you not to panic.’

ON LEAVING CASUALTY : ‘I’ve outgrown Penny a little but I am still very fond of her and the green jumpsuit! I’m really going to miss everyone, especially Ian Bleasedale, who plays Josh, and the group hugs with the prop guys out on location… I’m nervous ofcourse, leaving that mother ship. I am nervous about it and there is a risk with a change and I’m going to take it on.. and adventure!’

AMBITIONS : To set up her own drama therapy project. ‘I’ve some experience of kids who’ve suffered physical and emotional abuse and I’ve seen the healing effect that drama therapy can have on them’.

TELEVISION CREDITS : Miami Vice; The Bill; Hetty Wainthrop Investigates; Go Back Out the Way You Came In; Back Up; The Bill; Casualty; Rockface; Coronation Street; Clocking Off; The Afternoon Play – The Trouble With George; The Ghost Squad; Eleventh Hour; Doctors; Inside Men

FILM CREDITS : Things to Do Before You’re 30

THEATRE CREDITS : All’s Well That Ends Well; The Love of a Nightingale; The Plain Dealer

* Donna became a life saver in real life, when she was driving to work she came across a crash victim, who’d fell of his bike. Donna, wearing her paramedic outfit at the time, leapt out of her car and put him in the recovery position, ‘It was a bizarre experience, but because of all I’d learned on Casualty, I knew what to do.’