Holby City is your first major TV acting role, was it daunting joining such a long running show?

Yes it was super daunting, but everyone is so lovely and accommodating that I soon felt very much at home. They eased me into it perfectly by giving me more scenes day by day. The first day on set was just one scene with Rob Ostlere (Arthur Digby) and it was a night shoot so for some reason it felt more relaxed and because I had met Rob previously I felt far less nervous. Rob and I, purely coincidentally have a lot of good friends in common, so before I even started the show I had heard lovely things about him.

How did you get the part and how did you celebrate after learning you’d got the role?

I had four separate auditions over about four weeks to get the role. When I first read Morven I knew that she was a brilliant part, one that I would love to play because she seemed so kooky and zany. I could see her character jump off the page in my first reading of her which I suppose is quite rare. In the first audition I had about 12 pages of text given to me and a lot of it had complex medical terms. I remember the night before my first audition going through my lines thinking ‘My goodness, I just don’t think that I will be able to get my mouth around these words.  Even with a script in hand’.  Eventually I just had to trust that they had gone in my head and get myself a good night’s sleep. When I found out I got the role I was obviously over the moon but also in a state of shock. Because the audition process had been quite rigorous, I had just resigned myself to the fact that I had done my best and that’s all I could do. If they wanted me great and if not I was obviously not the right person for the part. So, when I did eventually hear about it I called my pals and my family but it still took a while to sink in.

My family and friends absolutely love the fact that I’m in Holby. I have a brother and a sister in law who are avid fans, so me being in Holby is just their idea of heaven. Although I think it’s a bit weird for them now seeing me on screen as suddenly they see that Holby isn’t actually a REAL hospital because they have me running around it pretending to be a doctor.

What have the rest of the cast been like to work with, have they helped you settle in?

The cast are AMAZING. So lovely. It really is like a family.

From her debut, Morven, looks like she’s going to be a really intriguing character to watch! How would you describe her and can you relate to her at all?

I would say she is unexpected. She still surprises me from time to time. She is incredibly bookish but this doesn’t make her boring as the  stereotype would suggest. She is kooky, interested in lots of different things, fair and warm hearted. Initially she may come across as a bit of a walk over but there is a lot more beneath than people pleasing surface. She wants to succeed in whatever she does and is super passionate about her job. I can relate to her in many ways but I am definitely not as clever as her! 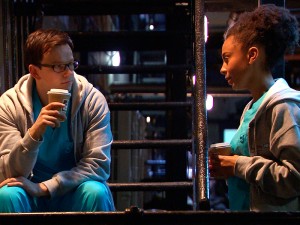 Morven and Digby have an interesting dynamic, how do you see their relationship and its potential development?

Well who knows! I am unsure of what is going to happen between them. Initially as we have already seen Morven threatens Digby’s hold on situations but Morven is unaware of this.  All she wants to do is please him and because she admired him so much at university she feels he can do no wrong. But will this last? Who knows!

How does she get on with the rest of the AAU team?

Morven all in all is a people pleaser and she wants to get on with everyone. She is trying to discover her own position in the ward and isn’t entirely sure of her status and other peoples status’s. She is keen to soak up knowledge from all of the doctors and she is learning just how valuable the nursing staff are. She admires and slightly adores Serena and we see that although Cara is a similar age, it is Cara who looks after Morven and tells her how it is from time to time.

How have you found learning all the medical terms on the show, do you find it difficult?

Learning the medical terms can be tricky, especially when it comes to pronunciation. Fortunately we have expert advice on set in the form of a nursing advisor who tells us what’s what.

Are you at all squeamish around the blood and gory make-up on the show?

What’s funny is that when I watch the medical procedures of Holby at home, I get incredibly squeamish but on set I don’t feel squeamish at all even though the prosthetics look super real. I think it’s the feel of the prosthetics that detach you from it. That and the smell maybe. They are rubber after all and the blood is a sugary solution.

Have you had to do any job shadowing in a real hospital in preparation for your role?

I unfortunately didn’t, although I would love to. Some of the other cast have and they have great stories about it.

Have you always wanted to be an actress? How did you get into acting?

My grandfather is very much into Amateur dramatics so from a young age I was exposed to all elements of performance. I idolised him and loved performing and it was something that I always did from as young as I can remember.

Have you had much response from viewers yet about Morven’s arrival onto Holby yet?

People have been so lovely thus far about Morven. So thank you to all you lovelies for saying such kind things about her on Twitter and social media. I hope you like her as much as I do playing her.