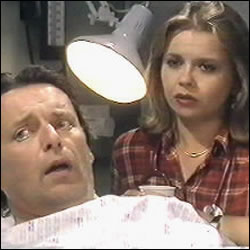 STORYLINE : Charlie is looking forward to his old friend, Robert, who has a broken leg, coming out of hospital that day and plans a celebrated drink, at the end of his shift. But when he goes back to the ward later, he is distraught to find he has died after collapsing

STORYLINE : In his first episode, MP Stephen Gregory is on a programme with Consultant Harry to discuss the closure of Holby ED. In his second episode, Stephen is involved in an argument with an angry constituent and falls down some stairs. The incident leads him to feel a failure as an MP and he plans to step down and spend more time with his family, however his condition deteriorates and he dies in CRASH.

STORYLINE : James, was the father of a patient that died, who ended up murdering SHO Victoria Merrick.