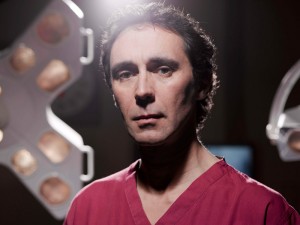 Dark Art Films has launched an ambitious crowd-funding campaign for its upcoming short film DONE IN, which is set to star HOLBY CITY actor Guy Henry.

Guy, who plays Henrik Hanssen in the medical drama is also known for his roles in Harry Potter and the Deathly Hallows, V for Vendetta and Rome.

DONE IN will be the directorial debut of renowned film critic and entertainment journalist Adam Stephen Kelly, whose writing credits include contributions to world famous entertainment website Ain’t It Cool News (where he is known by his pseudonym Britgeek) and The Layfield Report, the online home of professional wrestling legend John “Bradshaw” Layfield.

The short film tells the story of a man writing a goodbye to the world in the form of a suicide note, while he calls upon the memories of life in a beautiful country manor.

DONE IN is the second production from Welsh company Dark Art Films, Ltd., and is being produced by BAFTA member SJ Evans, who made his feature debut to critical acclaim with the 2010 documentary TATTOOS: A SCARRED HISTORY. His horror feature DEAD OF THE NITE, starring Tony Todd (CANDYMAN) and Simon Bamford (HELLRAISER) will be released later this year.

Evans commented, “At Dark Art Films, we are sent dozens of scripts every week to consider, but none had the impact that Adam’s story managed to make in just five pages. We jumped at the opportunity to be a part of the project. Add the superb talent of Guy Henry on top and this has the potential to be a masterpiece in the short film genre.”

The 22-year-old writer/director Adam Stephen Kelly said of the film, “Although it’s a short film, the idea behind DONE IN has always been to pack as much of a punch as possible in only a few minutes. The subject matter – suicide – is, of course, dark and troubling, yet the story is also very touching and heartfelt. It’s really an emotional rollercoaster and I think people are truly going to be shocked by the places we take them.”

Dark Art Films has a month to raise over £7,000. Kelly said, “We have a very ambitious target to meet for this film, but we want to do the script justice and make the very best looking piece we possibly can. This involves shooting on the RED Epic, the same camera used to film THE AVENGERS, and filming at the majestic Nash Manor outside of Cardiff. It’s a very visual story, and we are so incredibly excited that an actor of Guy’s calibre and repute has joined the project.”

Perks are available for those who contribute to the film, from scripts, DVDs and artwork signed by cast and crew, including Guy Henry, to set visits and screen and IMDb-credited special thanks and producer credits.

Please visit the DONE IN campaign page for more information on the film and how to contribute: DONE IN