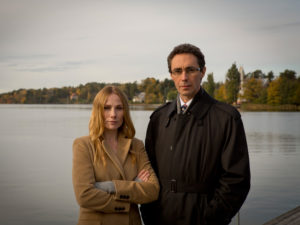 Holby City will be heading to Scandinavia in early January for a special storyline featuring Jac Naylor who is sent on a mission to discover exactly what has happened to rogue leader Henrik Hanssen.

Jac is told that Hanssen is in his native Stockholm and is actively blocking a financial offer from a Swedish pharmaceutical company which would pump £40m into the hospital. She is then charged with the task of going to Stockholm, finding Hanssen and more particularly, finding out why he is sabotaging what would be a lifeline to the hospital.

What follows is a story exploring Hanssen’s past, discovering why he has been missing for the past few months and also looks towards his future and whether he will indeed return to Holby City Hospital.

Meanwhile back at the hospital, Luc is haunted by events from the past and despite Michael and Sacha’s best efforts, he seems to be heading off the rails.  Will he be able to face his fears and get back on track?

Justin Young, Head Writer and Consultant Series Producer of Holby City says: “We are very excited and proud to announce one of the most ambitious episodes Holby’s ever made. With extraordinary performances and a stunning visual backdrop, it’s an epic, cinematic episode which takes viewers on what we hope will be an unforgettable journey to the very heart of our two most enigmatic characters: Luc Hemingway and Henrik Hanssen. It’s a story about love, confronting the past, and – for one of our characters – new beginnings?

This special episode of Holby City will air at 8pm on BBC One and BBC One HD on Tuesday 8th January 2013.