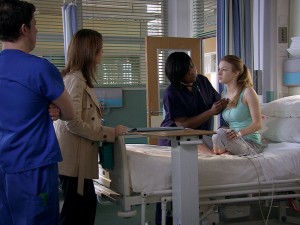 HOLBY CITY has come under fire following a storyline on organ donors.

Last week’s episode depicted a mother’s struggle to decide whether her brain-dead daughter, who carried a donor card, should donate her heart. Scenes that followed showed Mo breaking protocol by agreeing to let the mother meet the potential donor recipient’s family to appease her into allowing the heart transplant to go ahead. Jonny was forced to step in to not allow the meeting which leads the distressed mother to withdraw her consent at the last minute. However Mo effectively ignores her wishes, continues with the operation, claiming it’s late to reverse the procedure. It concludes with colleagues Mo and Jonny arguing over the rules that have been broken.

NHS Blood and Transplant claimed several potential donors had asked to be removed from the register as a result of the programme, claiming the storyline was ‘misleading’ and ‘wholly inaccurate’.

However the BBC said the plot was meant to show what happened if rules were ignored. In response, they said ‘Holby City has the utmost respect for real life medical professionals and in no way was it our intention to suggest that our portrayal of a heart transplant was an accurate reflection of how such a scenario would typically be handled within the NHS.

“As with all storylines we worked closely with medical experts who advised on transplant protocols but the purpose of this storyline is to dramatise the consequences that could arise should the correct protocols be wilfully ignored.

“This is an ongoing story and in the weeks to come viewers will see the main character Mo face up to the fallout of her actions.”