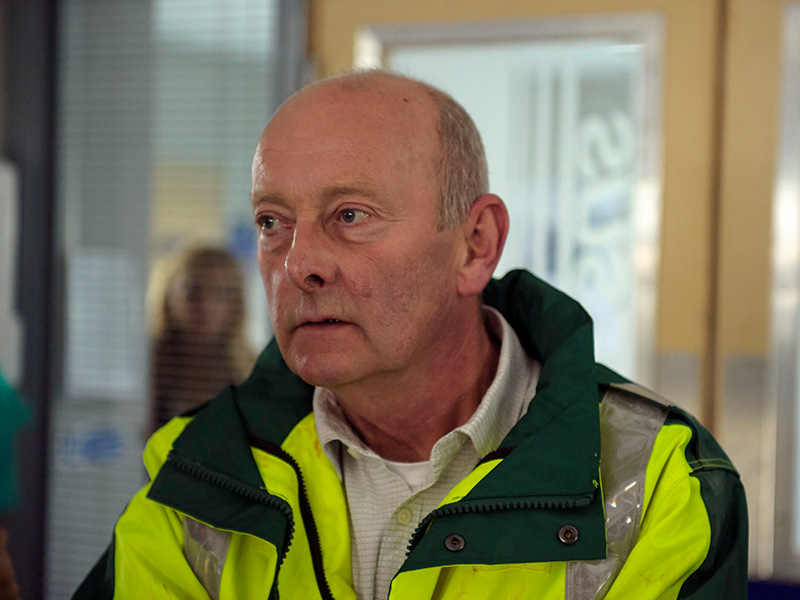 Ian Bleasdale makes a guest return to Casualty this weekend, as Josh arrives to celebrate his old friend Charlie’s anniversary.

Ian left the show in 2007 after 17 years on the medical drama as paramedic Josh Griffiths and he talks to holby.tv on what it was like to return…

Did it take much persuasion for you to make a return to Casualty?

A bit, because it was quite a difficult decision for me to leave the show to begin with as you spend so long doing it. I got very close to the ambulance services and Bristol A&E, as I used to do shifts with them. You get to know the people and that’s why it was a bit of a wrench. So the thought of going back into the show and with it being in a different place – as Bristol was quite special – and now it’s in Cardiff, it does feel totally different, it’s grown up!

What do you think of the new Set here?

It’s cracking though. It’s a great Set and is what the show needed. Being a long running show, it needed the investment.

Have you kept up with watching the show?

Now and again. I didn’t purposefully to begin with but I do dip into it and when I knew I was going to be back in it, I started watching it again and I think on the whole it is still consistently a pretty good programme  which is a testament.

Like I’d never been away – it was like I’d gone out the door and then back in for the next scene. I was right back into it!

We had always kept in touch. It’s unusual as these jobs normally are very transient, you meet people and off you go but with Casualty, you make a few really good friends.

What have you been doing since leaving the show?

Catching up! You forget when you’re away such a lot.

I’m really happy at home and have just got my first grandson which has kept me busy. So I’ve been getting on with life and having a good time! 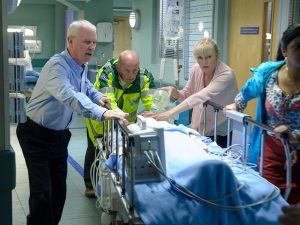 There’s plenty of stunts in this feature-length episode, do you remember any of the past stunts you have been involved with on the show?

Ooh crikey, quite a few  – I learnt to ride a motorbike with the police, flew in helicopters, abseiling and to get paid for it – it’s not a bad job!  I think the episode for which we won a BAFTA , when I jumped into the icy water, that was also great to film.

Why do you think Casualty has remained a success for so long?

I think it’s the cast. On the whole they have been really, really good . It’s like a lot of the soaps, such as Coronation Street, Emmerdale, Eastenders – there are some bloody good actors in it and they have to be to get on, that’s the secret. There’s no egos, no stars otherwise it wouldn’t get made.

And all the crew. It’s a bit cliché, but true – it really is a team effort.

Do you still get recognised as Josh?

I do, yes. I think they know that I used to be on the telly! It becomes part of the psyche. You’re in someone’s front room every Saturday which is a strange thing to get used to but it’s what you get paid for. It comes with the territory, you can’t begrudge it – it’s a cracking job and beats doing a proper job!

Would you every consider returning to Casualty full time?

I honestly haven’t really thought about it. I have huge affection for the show, I had a great time but I’m really enjoying my home life now.