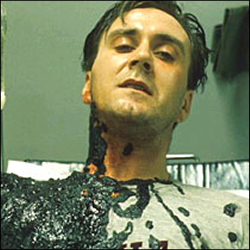 STORYLINE : Builder Bobby slips on scaffolding and hot bitumen spills onto him. In A&E his boss tries to buy his silence with £1000, but his wife, Helen, is persuaded by Valerie to sue – and Helen gives him back his money.

STORYLINE : Greg’s wife and two children are involved in a horrific road accident and he tragically watches as one-by-one he loses them. Josh is devastated for him and saddened by the memories the scene evokes.

STORYLINE : Martin’s paraplegic daughter, Megan, accidentally starts a fire in his scrapyard. Martin first takes his daughter outside and then rushes back in to get her wheelchair, however an explosion causes him to be thrown clear. In hospital the staff learn he has a radiation burn from a metal rod he had been carrying. Staff are temporarily quarentined with him in CRASH. His condition looks bleak whilst Kelsey has to give his selfish daughter some home truths.

ACTOR FAMED FOR : Charlie Burrows in The Upper Hand