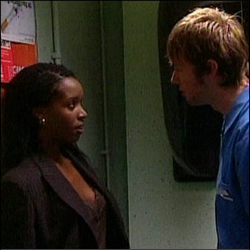 STORYLINE : Stevie is a journalist who tries to blackmail Abs for information.

STORYLINE : Diane treats patient Alisha, who is severely undernourished. The psychiatrist learns she hasn’t eaten for four weeks and refuses treatment, Diane is torn on whether to treat her against her wishes and when her condition deteriorates, Diane decides to drip feed her. When Alisha wakes, she is furious at what Diane has done and threatens to report her but as the pair talk, Diane manages to defuse to situation and gets her to open up.