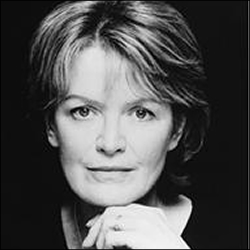 FAMILY : An only child. Her father (in equipment business) died when she was 28, her mother (department store worker/ model) when she was 11 of stomach cancer. ‘I was close to both of them although everybody used to say I was ‘Daddy’s girl’. Her late husband, Richard Beckinsale, died of a heart attack, aged 31. ‘There’s been a lot of death and loss… But there’s also been a lot of life, love and laughter.’

HUSBAND : Her current partner is director, Roy Battersby. Been together over 20 years, but married on her 50th birthday.

CHILDREN : One daughter, actress Kate Beckinsale. She also had a grand daughter Lily. ‘I’m a besotted granny and Mum, so quite a lot of my time has been spent helping my daughter with my granddaughter.’

TRAINED : Graduated at Birmingham University, with a BA degree in English/Drama.

ON CHARACTER JAN : ‘Jan and Charlie start a relationship that could cause conflict between them at work. Obviously it would be easier for Charlie if Jan wasn’t in the position that she is but they are both strong people.’

DESCRIBE JAN IN LESS THAN FIVE WORDS : ‘Professional, sense of humour, energetic, caring and a bit of a mystery.’

SIMILARITIES WITH JAN :’I think I’m a warm person and pride myself on being able to get along with a wide cross-section of people and Jan is the same. She makes sure she is seen as part of the team.’

ON JAN’S BEST & WORST TRAITS : ‘One of her great qualities is that, however isolated she is by her position as Chief Executive, she doesn’t present merely a professional persona, she is human and approachable. But she is no pushover and can be quite steely. Although she is certainly not a villain, there are times when she has to push the corporate line and that doesn’t always go down too well.’

REAL LIFE CASUALTY EXPERIENCES : ‘I have to confess that I have not only shut my thumb in my car door twice – I also did it to my daughter Kate when she was a child and I still feel the guilt and horror. It means going to hospital to have a tiny hole drilled in the nail to let the blood out, because the pressure build-up is terrifically painful. I also spent hours waiting in Casualty with Kate after she somehow managed to get a raisin lodged up her nose!’

FAVE FOOD : ‘My favourite is definitely Italian. We have a house in Umbria in Italy and the pasta that our neighbour Mariella makes is just wonderful.’

FAVE MUSIC : ‘I have very broad tastes, I love a piece of Mozart as much as a Bob Dylan song.’

ON KEEPING FIT : ‘I’m afraid I really don’t do very much. I am just very lucky that I have inherited my father’s genes and really don’t seem to put on weight at all. In the past I would have said that walking my dog Cassie helped keep me fit, but she is 15 now and so she’s slowed down a bit.’

BAD HABITS : ‘I smoke. Every day I wake up saying that I’m going to stop and I did once for three whole years, but then I got three jobs on the trot where my character had to smoke and that was it.’

HOW SHE RELAXES : ‘My grandaughter Lily is 2 and a half and I just love spending time with her. While Kate was working on Pearl Harbour I was lucky enough to be able to help out with Lily and that meant travelling to LA, New York, Toronto and Hawaii.’

PREVIOUS CASUALTY APPEARANCE: Judy has appeared in a previous episode of CASUALTY, in S9 E22, she played Roz McGregor. ‘I thought it would exclude me from doing this, but I think there are few actors who haven’t got an episode of CASUALTY on their CV!’

She has also played Jan Goddard in 9 episodes of HOLBY CITY.

FILM CREDITS : The Meaning of Life