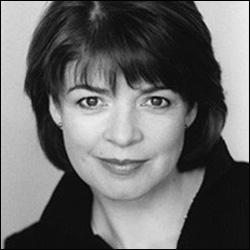 FAMILY : On her parents, ‘My parents were – and are fantastic. They devoted themselves to us, no holds barred, which is why I like so many contemparies always feels so torn between family and career.’

HUSBAND : Writer, David Harsent, aged 58. They met at a dinner party, and after a few full starts, due to work commitments, finally married in a registry office in Fulham, and went on to a restaurant with 30 friends.

CHILDREN : Daughter, Hannah (b.1990). She says of her ‘Hannah has been our greatest born and blessing’.’

PREVIOUS JOBS : She helped found a Community Centre in Newcastle, and worked at Nottingham Theatre, in Education.

WHY SHE LEFT CASUALTY IN SERIES 12 : Julia was away from her home in London, for ten months of the year, in the end her young daughter made a plea to her with a letter, ‘Dear Mummy, please do not do the next series’. It was that letter that brought it home to Julia, that she had to return to her family.

ON HER BEHAVIOUR AS BAZ IN SERIES 1 : Julia approved of Baz’s behaviour and was surprised it was seen as shocking, ‘Why shouldn’t women doctors go out with male nurses?’

ON BEING LIKE BAZ : ‘I hope I’m better at handling personal relationships.’ON RETURNING TO CASUALTY : ‘I was completely shocked and then delighted. It was super to work with Derek again, but I felt so weird to go back to Baz’s life.. Baz had grown up alot, personally I find this quite difficult to do. I found the old days of pill popping and stress much easier to play.’

FANS ON HER AFFAIR WITH CHARLIE : ‘I’ve had people coming up to me in the supermarket looking angry and snarling, ‘Aren’t you that horrible doctor’.. I’ve even had nasty letters disapproving on the way Baz behaved.’

ON HANNAH’S BIRTH : ‘I thought I had a high pain threshold, but I found I hadn’t’

FAVE FILM : Wings of Desire, The Lacemaker, The Piano

TELEVISION CREDITS : Parosi, Park Ranger; Science All Round (Time & Clothing); The Way up to Heaven; Shoestring; Rings on their Fingers; Cries from the Watchtower; Company & Co; Agony; The Great Philosopher; Maybury; Never the Twain; Souvenirs; Visions; Bust; Across the Lake; The Yellow Wallpaper; A Touch of Spice; Each to His Own; Shrinks; West Beach; Lovejoy; Casualty; This is Your Life (on herself); Welcome to Orty-Fou; Doctors; A Touch of Frost; Not Going Out; Midsomer Murders; Doctors

BOOKS : Appears in ‘CASUALTY : The Inside Story’ by Hilary Kingsley and ‘CASUALTY : Behind the Scenes’ by Rachel Silver.