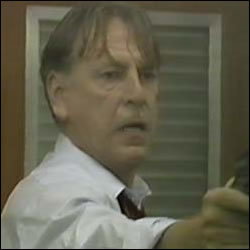 STORYLINE : A schizophrenic man, James, is brought in after being hit by a motorbike. He has just murdered his wife, Emma’s colleague, Robert, after believing they’ve had an affair. As Beth and Megan treat him in a cubicle, he pulls out a gun and takes Megan hostage and into CRASH. James insists a porter take out a dead body – Charlie, wanting to help, dresses in Jimmy’s uniform and goes in, but it backfires when Megan calls Charlie’s name. Later on Megan is just about to get the gun from him, when the negotiator calls out to him again, then Emma runs out and tries to talk to him, making him more angry. He aims to shoot at her, Charlie rushes to move her away, but is shot in the chest.