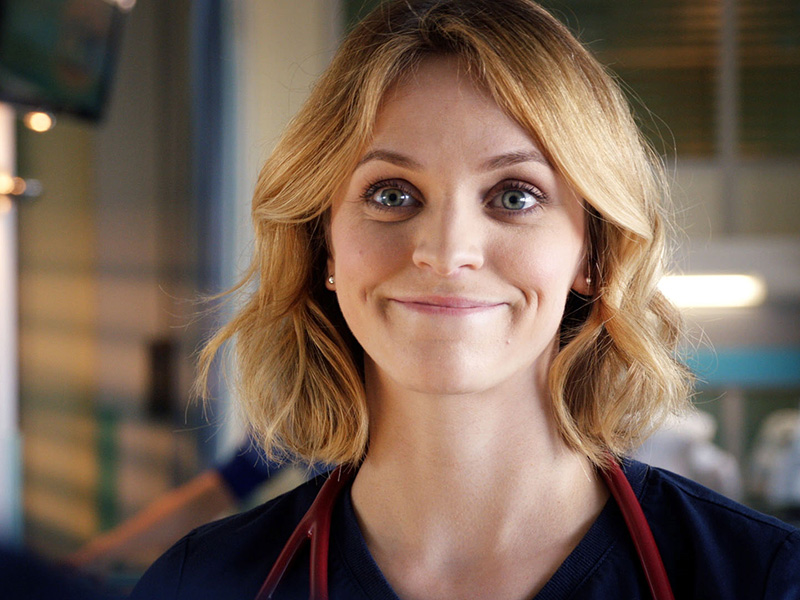 Actress Lucinda Dryzek joins HOLBY CITY next week as Jac’s half sister, F1 Jasmine Burrows. She talks to holby.tv about her arrival…

How do we first meet Jasmine?

She turns up at Holby in typical Jasmine fashion, late, lost and dressed as if she’s just jumped out of a taxi from Glastonbury…not exactly dressed for work. It was freezing the day we filmed my arrival and I kept having to jump out of the taxi in these tiny shorts. Inside the taxi I had a massive coat and two hot water bottles!

What has brought her to Holby? As the estranged sister of Jac, does Jasmine have more motive for getting a job at the hospital?

I do think there is an element of truth when she says she wants to train there because it’s such a good place to learn. But obviously her biggest motive is her curiosity about the half sister she has never known.

It will certainly be an interesting relationship to see develop, how does Jasmine feel about meeting Jac?

I think she honestly doesn’t know what to expect.

How does Jac feel about her being there?

You will have to wait and see. But I’m sure you can imagine, Jac’s family story has never been something to make her smile.

What else can you tell us about Jasmine’s personality?

She’s confident, positive, she goes with her gut instinct. I think she cares about the opinion of those who matter to her, the consultants etc. But with everyone else she’s not really bothered and just happy to do her own thing. I think she’s spent a large portion of her life moving around and never settling so she’s used to bouncing in, making a few friends, annoying some people and then bouncing out again. Which is fine whilst she was young but I think she now wants to settle down a bit and maybe that’s why she’s come to find her family.

Who does she bond with from the team? Any potential romances for her in the future?

She gets off to a slightly rocky start with Ollie as she sort of says the wrong thing the first time they meet and puts her foot in it. But she soon wins him back round and they have a good bond. He’s her mentor on the ward and I think because she’s quite playful she brings out that in him too eventually, she’s some light relief for him. She also bonds with Mo, Jasmine is pretty hard to not like because no matter how many times she’s knocked she just gets straight back up.

I feel like I’ve been here ages now and my first ep hasn’t even aired yet! It can be quite nerve wracking turning up on your first day. Especially when you are the new person and everyone else already is a team. But everyone has been so great. Chizzy covered me in blood on my first day in theatre as an initiation and ever since then I’ve been part of the team too.

My first scene with an op, I walked in and was pretty grossed out. I’m quite squeamish about that sort of stuff so I just spent the first 5-10 minutes just staring at it and poking it just to try and desensitise myself a bit. And now I’m fine, I guess you just get used to it all.

It’s getting easier. My first week was quite intense and I had so much to learn and so I was wandering around my flat just repeating the words over and over and over. But now I’ve been there a while and I know how great the medical advisors are I’m more confident about it. They will let you know if you are saying it wrong so you don’t have to worry about messing up.

Have you done any job shadowing in a real life hospital preparation for your role?

I haven’t had a chance as I was cast so close to my start date. I would love to when I get a chance though!

I was. I haven’t watched it as much since I moved out of my mums but when I go back to visit it’s always on so I’ve always stayed mostly up to date with what’s going on!

You’re no stranger to Holby, having appeared in sister show Casualty as the daughter of Harry Harper. What memories do you have from your time on the show?

Yes it did occur to me the other day that this will be the second time I’m a relative of a doctor at Holby city hospital! I was much younger then and I’ve got an awful memory in general but I do remember going down to Bristol for filming and having lots of fun.

In this article:homepage_feature, Lucinda Dryzek