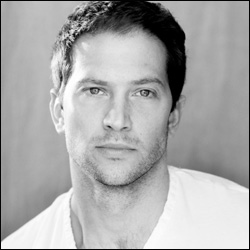 TV LIKES : ‘X Factor because I get hooked on it. It’s frighteningly compulsive viewing. I don’t want to see people go through the audition process because I know how gruelling and difficult it is.’

ON FIRST DAY AT HOLBY : ‘It was a filmed rehearsal in front of all the producers of a script I’d only recently received. We were constantly reassured it wasn’t a test, but of course you can’t ever get it out of your mind. Tom and I were bricking ourselves, but it was a good first hurdle.’

ON CHARACTER JOSEPH : ‘Joseph’s very stuck in his ways, in so far as he’s rather bookish, very straght-laced and incredibly meticulous to the point that it develops into a disorder. It’s really fun to play.’

ON LEARNING MEDICAL TERMS : ‘The trick is to say it with confidence and people will buy it! At the beginning I tended to look up all the diagnosis I was giving, but after a while you realise you’d need years and years of training to fully comprehend exactly what you were saying.’

ON CROSSROADS ROLE : ‘I was in Crossroads for six months and I loved doing it. I was in the final incarnation with Jane Asher. I played her wayward playboy son – for me it was a lot of gambling and Jacuzzis. It was so exciting to do, because it was my first long-runner. I had a great character and I got to work with some really nice people.’