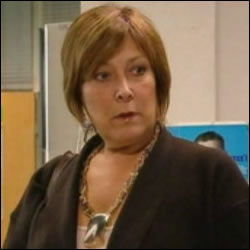 STORYLINE : Former drug addict Caitlin comes to the hospital after her two sons are brought following a fight. Caitlin has neglected one of her sons, blaming him for his irratic behaviour as a child. Mark reveals to Connor that she may have caused the condition he suffers now due to her drug addiction whilst pregnant.

ACTOR FAMED FOR : Helen Herriot in All Creatures Great and Small; Faith Grayshott in Second Thoughts