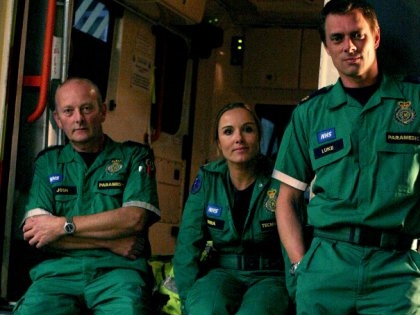 As one of the show’s longest serving characters, we take a look at some of paramedic Josh Griffiths most memorable moments on the show…

One of the most heartbreaking moments in CASUALTY history came in Series 11 when paramedic Josh took a call-out to his own home and discovered that his house was ablaze with his family trapped inside. Tragically his wife, Helen and his two children, Sarah and Ashley were killed which had lasting effects on Josh.

Last year’s BAFTA award winning Christmas episodes saw Josh being stabbed in the back of an ambulance by Laura Merriman (played by actress Holly Aird) – an unstable mother suffering with Munchausen’s disease. Left for dead, Nathan comes across a seriously injured Josh and the team battle to save him. Although Josh recovered from his physical injuries, the mental scars were more difficult for him to forget.

Following the death of his first wife, Josh embarked on a relationship with nurse Colette in Series 16. The couple wed at the hospital chapel however their relationship was not to last. Colette had an affair with womaniser Simon Kaminski – which started at the Christmas party 2002 whilst Josh was with a mentally ill patient who crashes them both into the hospital department. Josh was heartbroken when he discovered the depths of Colette’s affair and that the baby she was carrying wasn’t his. When she suffers a miscarriage and decides to leave Holby, Josh still hopes to reconcile however she says she can’t forgive herself for what she did to him.

At the beginning of Series 16, Josh was accused of dangerous driving when he jumps a red light, crashing with a car whilst the ambulance is left hanging precariously over a railway bridge. It results in the death of a teenage passenger in the car. Josh faces an inquest and despite an ‘Accidental Death’ being ruled, Josh battles his own demons and thinks he should resign. However he later realises his vocation.

Long term friends Josh and nurse Charlie have always had a strong bond. Charlie was of strong support following the break up of Josh’s marriage to Colette and one of their most memorable moments together was when they went AWOL in an episode of Series 18. The pair reminisce about old times and even goes skinny dipping at the beach! The pair recently had a fall out when Louis accused Josh of hitting him, however after his stabbing, Louis owned up and his close death encounter brought them closer.

After his family bereavement, Josh befriends a young boy Liam, who has also became an orphan after losing his father in a fire. Unhappy Liam, who is moved to a foster home tries to get Josh’s attention by making hoax calls and later Josh arranges a five-a-side charity football match for the home.

In Series 19, Josh is called to a house to treat a baby that is unwell. Whilst holding baby Abby he trips and falls. Abby is rushed to hospital but dies. The parents blame Josh for killing Abby. Josh fears that he harmed Abby but Maggie tells him there were no signs of injury. An investigation into Josh’s conduct begins. The father confronts Josh, calling him a killer but then admits he had been drinking and had taken Abby to bed. When he awoke he realised he had smothered her. Josh is relieved to know it was not his fault.

In Series 7, Josh is off-duty, when he comes across an RTA, in which a young motorcyclist has fallen off his bike. While Josh calls for help, an interfering GP removes the boy’s crash helmet, putting his spinal cord at risk – Josh is furious, confronting the GP, and thinks of telling the boy’s father.

In Series 21, Josh celebrates 20 years of service. He is due to attend an awards ceremony to mark the event. But when a string of events makes him question society’s values, his decision whether or not to collect his much-deserved award hangs in the balance. He eventually decides to accept the award.

One of the best paramedic partnerships was that of Josh and his colleague Jane Scott – even his wife became slightly jealous over their close bond. A memorable incident in Series 7 happened following a radioactive contamination from a security van crash. With Josh and Jane unwittingly contaminated – the pair are forced to strip and shower at the hospital.