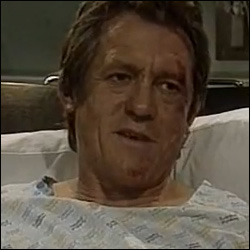 STORYLINE : Andy has been made redundant and he is spending his days helping his neighbours with various things. He is cleaning up some old junk from his neighbour’s well when all in sudden the well collapses. The accident looks nasty and he fractures his right leg in two places and cracks a rib. His wife comes into hospital and accuses him of playing benefactor by helping all their neighbours and not wanting them to pay him for it, but she has found out that he has found some expensive old things in the wells and sold them, without telling the owners how much the things actually were worth.