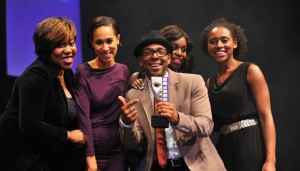 HOLBY CITY have come away with a number of awards at this year’s MVSA Awards.

The show won ‘Best Long Running Drama’ whilst Chizzy Akudolu, who plays Mo in the medical drama, picked up ‘Best Short Film’ for ‘5 Mins’ that she wrote and was directed by David Innes Edwards.

The short film will be shown at the 3rd Annual TriForce Short Film Festival in London  later this month.