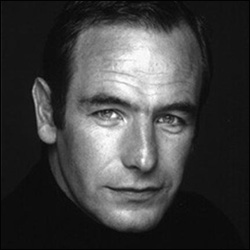 FAMILY : Father, Robson Senior – an ex-miner, and mother, Anne. He has two sisters, Dawn and Joanna and a younger brother, David.

PREVIOUS RELATIONSHIPS: Split from wife, Vanya Seager, an ex page 3 model in 2011. Married in March 2001 at a ceremony at Clivedon House in Berkshire. Vanya has a teenage daughter, Lara.

Divorced from Alison, an occupational therapist, of 10 years. He once said of her ‘she was the best thing that ever happened to me’.

STUDIED : Went to Dudley Primary School and Middle Schools, and then to Seaton Burns School on Newcastle.

PREVIOUS JOBS : Robson worked as a draughtsman at Swan Hunter Shipbuilders, on Tyneside for four years.

ON LEAVING CASUALTY : Robson was offered £250,000 to stay in Casualty, and it was rumoured his character, Jimmy, may have become a nurse, but he turned it down, ‘It was a lot of money to leave, but I couldn’t take the part any further. Jimmy was the hospital clown and that was it. I had a wonderful time but I wanted to leave while it was on top.’

ON SEEING HIS REHEARSAL : ‘When I first saw my performance as Jimmy, I was horrified. There was this wooden, terrified guy.’

FIRST BOOK TO HAVE AN IMPACT ON HIM : ‘Animal Farm’ by George Orwell, he also likes Tom Sharpe, Sid Chaplin, and Roddy Doyle.

MUSICAL CAREER : In 1984, Robson was part of a capella group called ‘The Working Tickets’, but is best known for his cover songs with Jerome Flynn, who also worked with him on ‘Soldier Soldier’, They had two successful years in music, having three number one hit singles, and two successful albums;

FILM CREDITS : In Search of Perfection

BOOKS : Appears in ‘CASUALTY : The Inside Story’ by Hilary Kingsley, ‘The Story of Robson and Jerome’ (1996) and his autobiography ‘Just the Beginning’ (1997).

* In 1997, he won the North East Personality of the Year, and he has also won ‘Best Actor’ at the National Television Awards.

* Robson was asked back to appear in Baz and Charlie’s wedding, but he declined due to other work commitments